Donald Trump was elected president after a campaign of bold promises. Voters responded to his sweeping assurances on everything from health care to immigration and his overall pledge to Make America Great Again.

Now, after Trump’s first year in the White House, he has confronted the reality of governing: nothing is quick or simple. He has delivered on some major promises and stumbled on others.

Here’s a look at how Trump’s first-year performance stacks up to his biggest promises.

Promise: Trump assured skittish Republican voters that he would nominate conservative judges and published a list of vetted candidates during that campaign that he promised to pick from for the Supreme Court. “Some people say maybe I’ll appoint a liberal judge,” Trump said in March 2016, announcing he would put out his conservative list. “I’m not appointing a liberal judge.”

What’s been done: Trump held up his end of the bargain in the earliest days on the job by nominating Justice Neil Gorsuch to the high court. Since then, Trump and his team have spent his first year filling a record-breaking number of federal appeals court vacancies, and there are many spots still left. So far, he has come through.

Promise: Trump said before he took office that he would be “the greatest jobs producer that God ever created.” He promised to create 25 million new jobs over a decade.

What’s been done: After Trump’s first year, the economy is healthy, with stocks continuing to soar, unemployment dropping and strong GDP numbers. But job growth isn’t living up to Trump’s bold promises: to get to 25 million jobs in that time, the economy would need to add more than 200,000 jobs per month. While some months topped that in 2017, the average is lower, Mic reports.

Promise: Trump said he would “bomb the hell” out of ISIS, get tough on North Korea and recognize Jerusalem as the capital of Israel.

What’s been done: Trump loosened restraints on U.S. military commanders, resulting in more airstrikes and ISIS has lost strongholds in Iraq and Syria. He has taunted North Korean leader Kim Jong Un, calling him “Rocket Man” and tweeting that the American “nuclear button” is a “much bigger & more powerful one than his, and my Button works!”

Trump reversed decades of foreign policy during his first year and formally recognized Jerusalem as Israel’s capital in December. He put in motion plans to move the American embassy there, though that process could take years to complete.

What’s been done: Congressional Republicans failed multiple times during Trump’s first year to repeal Obamacare. Trump even wavered on his campaign promise after one such failure, saying that instead of repealing, “I think we’re probably in that position where we’ll just let Obamacare fail,” he told reporters, according to NBC. “We’re not gonna own it.” But Hill Republicans did scrap the individual mandate in their tax reform bill, which dealt a severe blow to Obamacare. Senate negotiators reached a bipartisan deal to stabilize insurance markets, but the legislation hasn’t come up for a vote.

Promise: Beginning on the day Trump announced his campaign in 2015, he pledged to crack down on illegal immigration and build a wall along the southern U.S. border. He vowed that Mexico would pay for the wall.

What’s been done: Contractors have built prototypes, but there’s no wall and no money allotted for one after Trump’s first year in office. But after Chief of Staff John Kelly implied that Trump’s stance on a wall was changing, the president set the record straight. “The Wall is the Wall, it has never changed or evolved from the first day I conceived of it,” Trump tweeted on Jan. 18.

The White House and Congress are currently negotiating an immigration package focusing on border security, DACA, chain migration and the visa lottery program. But with a government shutdown in the balance for 2018, they have yet to reach a deal.

Promise: Trump said he would reform the federal tax code, assuring voters during the campaign that “everybody is getting a tax cut.”

What’s been done: Trump signed a GOP-led tax reform bill into law in December. The package polled poorly and didn’t match all the specifics Trump offered on the campaign trail: it didn’t cut the number of tax brackets, for example, or eliminate the carried interest loophole, Politifact reports. Still, it delivered on other promises, such as creating a 10% repatriation tax, and overall it was the biggest legislative achievement of his first year.

Promise: Trump pledged to pull out of the Trans-Pacific Partnership (TPP), get a “much better deal” on the North American Free Trade Agreement (NAFTA) and fix the U.S. trade imbalance with China.

What’s been done: Trump formally withdrew the U.S. from TPP shortly after his inauguration. The Trump Administration has been in talks to renegotiate NAFTA, though nothing has happened yet, and Trump toned down his rhetoric toward China during his first year as president. In a call with Chinese President Xi Jinping on Jan. 16, Trump “expressed disappointment that the United States’ trade deficit with China has continued to grow,” according to a readout of the call provided by the White House, and “made clear that the situation is not sustainable.” 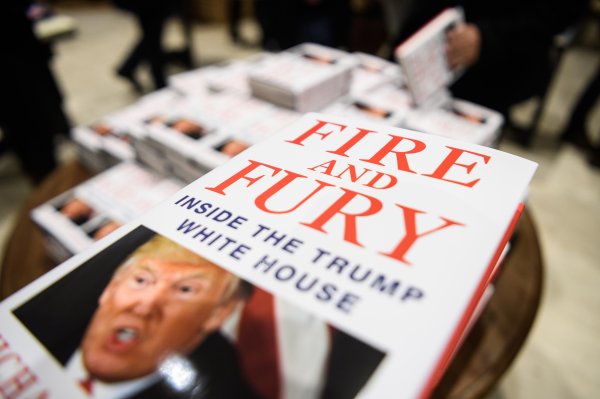 How Fire and Fury Author Michael Wolff Got Into Donald Trump's White House
Next Up: Editor's Pick