'It Hurt Like Hell.' Ann Curry Opens Up About Leaving NBC's Today Show

Five years after leaving the Today show, Ann Curry is revealing how she made it through dark times — and her life away from the morning grind.

Sitting down exclusively with PEOPLE for this week’s issue (on stands Friday), the anchor opens up for the first time about her exit from the NBC morning show in 2012, an ordeal that came complete with gossip-column speculation that her firing had been due in part to a lack of “chemistry” with her co-anchor Matt Lauer. (Lauer, 60, was fired in November for alleged sexual misconduct.)

After her tearful farewell on June 28, 2012 — “I’m sorry I couldn’t carry the ball over the finish line, but, man, I did try!” she said at the time — Curry, 61, who has won seven Emmys, interviewed world leaders, covered natural disasters and reported from war zones, was suddenly adrift.

“It hurt like hell,” she says. “It hurt so much, but I learned a lot about myself. I can say I’ve done nothing wrong. I’ve been honest and true. I’ve tried to stay pure. I’ve tried to not respond in a knee-jerk manner, and I’ve stayed very close to who I am. So it hurt, but I’m also proud of myself.”

Curry — who began as an intern at an Oregon NBC affiliate and worked her way up to Today‘s couch, earning a reputation for being earnest and empathetic — stayed remarkably mum after her co-hosting gig with Lauer ended after barely a year.

“Experience has taught me, as a journalist, the No. 1 thing you have to be is humble,” she says. “It’s not about you.”

And the mother of two, who returns to TV on Jan. 23 with the new six-part PBS docuseries We’ll Meet Again, isn’t fueled by bitterness toward her former bosses.

“I’m not going to say it wasn’t hard,” she says of coping with lingering resentments. “But I had to let go. And I learned that when you not only let go but open your arms wide and learn the lessons that an experience — no matter how bad — can teach you, that’s when you rise.”“I can say today I’m stronger now,” she says. “I’m smarter. I’m happier, as happy as I’ve ever been. And my compassion has only grown. When you go through the pain and learn the lessons, you will be changed for the better.”

Now, Curry is embarking on her next journey. We’ll Meet Again, the first series developed by her own production company, focuses on 12 stories of people searching for individuals who changed their lives.

“I’ve always thought of journalism as a service profession,” she says. “I’m in it to give, not to get. This show lets me explore people’s beautiful wishes to reconnect with the people who helped them survive.”

“The power we have to do good and to have compassion lives deep within us all, and I believe it’s something we need to be reminded of,” she adds. “There are times we forget it exists, and we may be living in one of those times right now. But the capacity for good is still there. It exists, and it will rise again.”

Curry will also appear on CBS This Morning on Wednesday for her first network TV interview since leaving NBC. 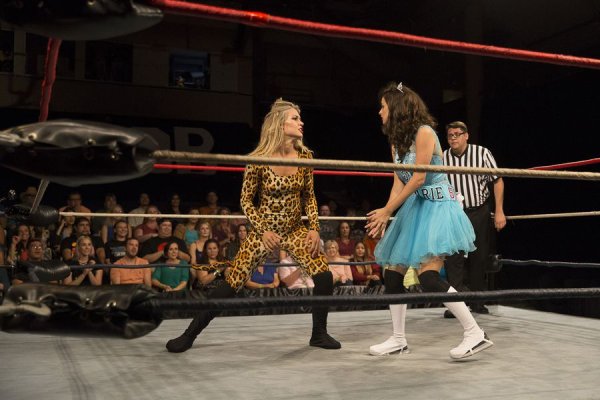 The Bachelor Recap: Finally, The Bachelor and GLOW Crossover of Your Dreams
Next Up: Editor's Pick