During inter-Korean talks on Monday, North Korea agreed to send a 140-member orchestra troupe along with its athletic delegation to the Winter Olympics in Pyeongchang, South Korea next month. The historic foes agreed that the North Korean orchestra would perform in Seoul and Gangneung, near the site of the Winter Games, in the hopes of “[contributing] to improving relations and recovering the cultural homogeneity” of the Korean Peninsula, South Korea’s Unification Ministry said.

News of the official North Korean delegation, which the North said will also include its famous cheerleading squad and a press corp, has raised speculation that the orchestra will be accompanied by another cadre of performers: Moranbong, North Korea’s all-star pop group. It hasn’t been confirmed whether or not Moranbong will attend the Games, but here’s what you should know about North Korean leader Kim Jong Un’s favorite band:

The all-female group, also known as the Moran Hill Orchestra, was founded by Kim Jong Un in 2012. The North Korean leader reportedly handpicked the members himself, as part of a “grandiose” cultural modernization effort, according to Korean state media. They’re known for their military uniform-style costumes, extravagant stage shows, and synthesizer-backed anthems that reveal a certain degree of Western cultural adoption in the pariah state. They have performed in sequin-covered mini-dresses with Disney-themed backdrops and have even performed string-heavy instrumental covers of Frank Sinatra’s “My Way” and the theme to the Rocky films.

Most of their repertoire, however, appears to be focused on one subject: the young North Korean leader himself. “How can he be so kind,” the lyrics to one ballad go. “His smile is so warm and sweet. I have no choice but to be taken by him and his warm heart.”

Why are they significant?

The troupe has performed at high-profile events in North Korea. More significantly, the regime has used them as a soft diplomacy tool, bringing out the band to perform for a Cuban delegation in Sept. 2015. Moranbong’s first international tour, a three-concert calendar planned for Beijing in December 2015, was canceled after Chinese authorities objected to “anti-American” lyrics out of fear of escalating tensions, Reuters reported. The band resurfaced in February 2016 with a performance to celebrate a recent missile test.

Speculation has swirled that Moranbong could attend the PyeongChang Winter Games since former bandleader Hyon Song Wol, who was reportedly promoted to the party’s Central Committee in October and is a prominent public figure, was present at the inter-Korean talks in the truce village of Panmunjom on Monday.

Moranbong’s songbook leans heavily on nationalism and revolutionary rhetoric, including songs called “Advance of Socialism” and “We Love the Party Flag,” which could risk falling foul of South Korea’s security laws, according to the Guardian. Performances including rocket imagery or praising North Korea’s weapons program would also likely rankle attendees, particularly following a year of threatening rhetoric between Kim Jong Un and President Donald Trump.

Other facts about Moranbong

There is some confusion over how many members there are in the band, with some sources saying 10, and others up to 20. There has also been a high turnover of members. But each performer holds an official senior military position — Hyon Song Wol is reportedly a colonel in the Korean People’s Army of the North. They also play their own instruments. In 2013, they were put on a regimented diet to standardize their waistlines, according to North Korea watchers Sino-NK.

Amid a prolonged public absence in 2015, there was speculation that the band had been purged or replaced by the Chongbong Band, a seven-member singing group that North Korea’s state news agency praised as a “promising revolutionary art troupe,” according to the BBC. The band reappeared shortly after. Rumors about Hyon Song Wol have also romantically linked her to Kim Jong Un, and she was thought to have been executed with a group of former performers in a sex-tinged scandal before reappearing on Korean television in 2014. Kim is married to Ri Sol Ju, who is also believed to be a former performer with North Korea’s Unhasu Orchestra. 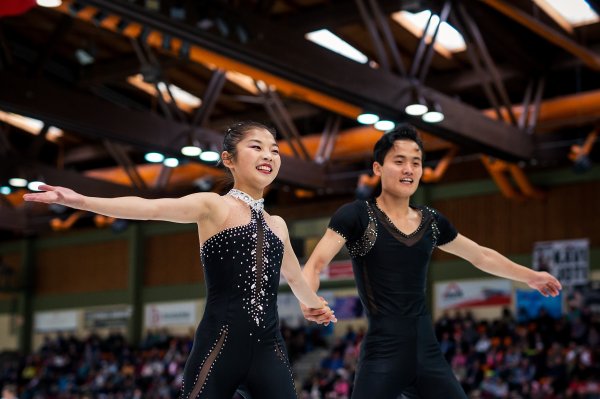 A Look Back At North Korea's Olympic History As It Prepares for South Korea
Next Up: Editor's Pick