A car crashed into the second story of a southern California office building Sunday morning after the vehicle went airborne when the driver hit the center divider in the road, officials said.

Making for an unusual sight, the car appeared lodged into the second story of a dental office in Santa Ana, Calif., when Orange County Fire Agency officials arrived at the scene. Two people suffered minor injuries as a result of the crash, officials said.

The Santa Ana Police Department said the car “was traveling at a high rate of speed” when it hit the center divider and went airborne. According to the police department, the driver of the car “admitted to using narcotics, and will be admitted to a local hospital for observation.”

In a tweet early Sunday morning, Orange County fire officials said one person was still trapped inside the car when they arrived to the scene. He or she was later removed from the vehicle.

The other person had “self extricated,” officials said.

As the sun came up in California, officials in the Los Angeles County Urban Search & Rescue team helped Orange County fire officials remove the car from the building. A fire that sparked as a result of the crash was also extinguished, officials said.

Santa Ana is located about 35 miles south of Los Angeles. 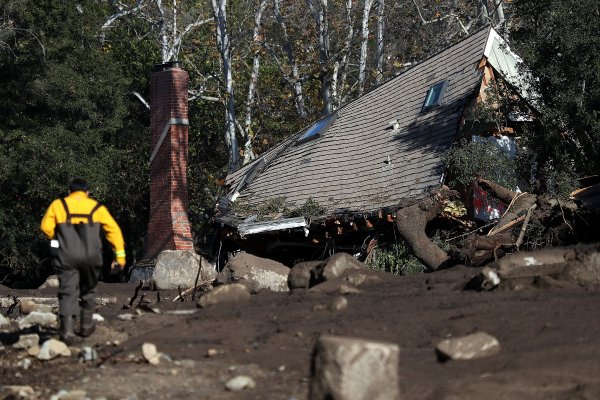 3-Year-Old Girl Among 18 Killed in California Mudslides
Next Up: Editor's Pick