In The Commuter, Liam Neeson Saves a Train with Implausible Aplomb

Jaume Collet-Serra, director of Unknown, Non-Stop, Run All Night and the superb shark-amok thriller The Shallows, understands two things well: The enduring pleasures of watching angry sea beasts go to town, and the bruised-lion appeal of the 60-something Liam Neeson. The Shallows, beautifully made and taut as a drumskin, is Collet-Serra’s best movie. Unknown, Non-Stop, Run All Night and now, The Commuter—all featuring Neeson, commanding yet vulnerable in that inimitable Neeson way—are shakier entertainments, but no one is trying to sell you something you’re not actually going to get. The Commuter could be summed up thus: Liam Neeson saves a commuter train. If you’re on board for that, well then, all aboard.

Neeson plays Michael MacCauley, an insurance salesman who lives in the suburbs of New York and commutes to the city every day for his job—which he loses within the film’s first 15 minutes. How to tell his wife (a sadly underused Elizabeth McGovern) and college-bound kid (Dean-Charles Chapman)? He’s one of these guys who appears to have plenty of money but is in fact dangerously over-leveraged, a symbol of the reality that even the most stable, hardworking guy can fall through the system’s cracks. And to be out of a job at age 60 is nobody’s idea of fun.

Before boarding the train home—and after meeting an old pal and colleague, played by Patrick Wilson, for drinks—Michael loses his phone, a bad omen if ever there were one. And once he’s on the train—where he chats with the fellow travelers he sees on this route every weekday, as well as checking out, with benign curiosity, the faces of the riders he’s never seen before—he meets a beguiling stranger: Why, it’s Vera Farmiga in a fab pair of two-tone high heels! She has a proposition for him. Stuff happens. In the end, he saves the train.

The Commuter starts out with seemingly modest intentions: Collet-Serra and cinematographer Paul Cameron do a fine job of capturing the blissfully humdrum routine of getting ready to leave home for work every morning, including the minor squabbles with the teenage kid and the hurried, affectionate goodbye kiss shared with the wife. Collet-Serra also turns that ubiquitous New York slogan “If you see something, say something” into a symphonic collage of paranoia: Neeson scans the faces around him, just so he knows who’s around; a bulky, bumpy bag or a dude with a shifty expression might occasion a doubletake. The first half-hour or so of The Commuter is an artful ode to the way people get around in this city, half watchful, half zoned out. Everyone’s in a hurry. Nobody can be clocking every single thing every single minute.

As The Commuter rattles on, the plot becomes more and more implausible—though again, believability isn’t what we’ve signed on for here. What we want is Liam Neeson looking pained as he grapples with a torturous moral decision; Liam Neeson cracking a baddie over the head with a busted guitar; Liam Neeson on a speeding train clinging for dear life to…well, to anything, as long as it’s moving fast. The Commuter is intriguing for some 80 percent of its duration and completely ridiculous for the last 20. But you probably knew that even before the conductor punched your ticket—and anyway, you’re just along for the ride. 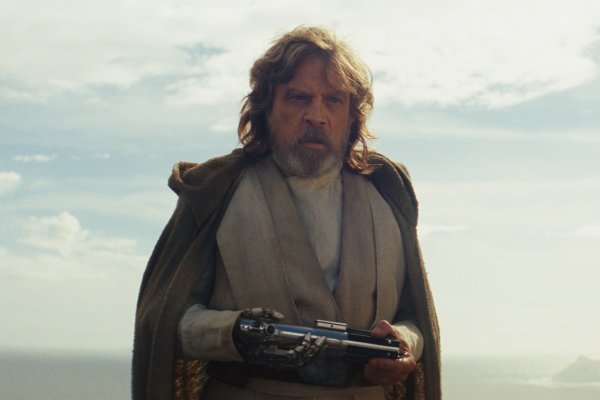 Here's the Answer to Your Burning Question About That Pivotal Star Wars: The Last Jedi Scene
Next Up: Editor's Pick