James Franco Accuser Violet Paley: 'I Wish He Made a Promise to Change'

“I was just like: ‘Well, now no one is going to believe me,'” she told TIME on Thursday.

Paley, 23, first spoke out about her experience with Franco on Twitter after she saw footage of him wearing a “Time’s Up” pin as he accepted the Golden Globe for Best Actor — Musical or Comedy on Sunday night.

Paley was among five women to accuse The Disaster Artist star of sexually inappropriate behavior in a Los Angeles Times report published Thursday. Franco’s attorney denied all allegations against him to the Times. His attorney and spokesperson did not immediately respond to TIME’s request for comment.

Paley told TIME that she met Franco through a mutual friend in 2016 and that he took an interest in her writing. She said he was initially a “good friend and mentor,” then the relationship became “romantic.” In April of that year, Paley visited Franco on a student film set of an adaptation of William Faulkner’s “A Rose for Emily,” Paley’s favorite short story. Paley said she thought the two would hang out on set, but instead Franco came out to her car and asked her to drive to a different location. Once they parked, Paley said Franco pressured her to perform oral sex on him.

“I felt really off about it, and I got really upset… I just thought I was being dramatic,” she said. “I knew I felt weird about it.”

Franco’s attorney told the Times that Paley’s allegations were “not accurate.”

Franco and Paley’s relationship continued after the alleged incident, but they stopped seeing each other a few months later.

The pair then fell out of touch, but a week after the New York Times reported on multiple allegations of sexual harassment against Harvey Weinstein in October 2017, Paley emailed Franco to express her discomfort with what she said happened in the car. (Paley shared the email with TIME.) She said Franco never responded to her email, but he called her months later to tell her he was a “changed man” and that he was wrong to be in a sexual relationship with her while she was recovering from substance abuse.

He appeared on Late Night With Seth Meyers on Wednesday night, where he again denied the allegations but said he would “take knocks” to empower women to speak up about their experiences.

In this handout photo provided by NBCUniversal, James Franco, with Tommy Wiseau and Dave Franco, accepts the award for Best Performance by an Actor in a Motion Picture – Musical or Comedy for “The Disaster Artist” during the 75th Annual Golden Globe Awards at The Beverly Hilton Hotel on January 7, 2018 in Beverly Hills, California
NBC/Getty Images

Paley said Franco’s response is upsetting. “He’s saying that he cares about these women speaking out. It’s such bulls—t,” she said. “He lied on TV on two different late-night shows, making me — who doesn’t have a platform at all — look like a psychopath.”

Franco told Colbert on Tuesday night that “if there’s restitution to be made, I will make it.” Paley said that Franco hasn’t reached out to her since she spoke up, and she has not tried to contact him.

Paley said coming forward has been difficult. She’s received a barrage of criticism on social media, including death threats. She deleted the Twitter app off of her phone and made her Instagram account private, though more women have privately reached out to her with allegations against Franco.

“I’m fine most of the time, but sometimes I’m regretful and wish I hadn’t said anything. Sometimes I just want to leave L.A.,” says Paley, a writer and filmmaker, but “I think it’s still worth it because of that feeling of knowing that you’re helping someone else and standing up for what you know is right.” She said it would be validating if prominent Hollywood women spoke out against Franco, but what she really wants is for Franco to take responsibility.

“I wish he had originally replied to my email and met with me and just listened. I wish he made a promise to change,” she said. “When the allegations against Louis C.K. came out — and they were disgusting — he acknowledged what he did. It would give me some comfort if he were to say, ‘What happened was true and I’m sorry.'” 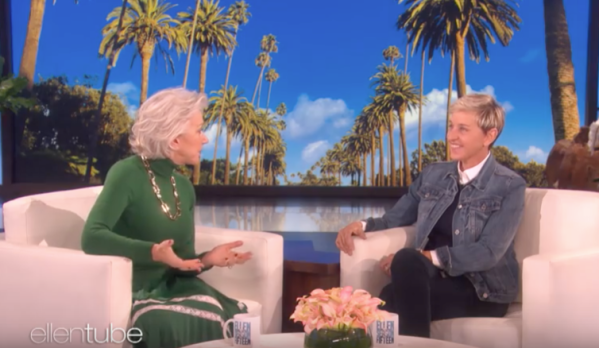 That Must-See Moment When Helen Mirren Found Out Her Real Age Live on Ellen
Next Up: Editor's Pick