Here's the Answer to Your Burning Question About That Pivotal Star Wars: The Last Jedi Scene

Luke Skywalker’s final scene in The Last Jedi saw the Jedi master — or at least a Force projection of him — face off with Kylo Ren on the salt fields of the planet Crait. But instead of wielding the green lightsaber fans became accustomed to in the original trilogy, Luke fought his former apprentice with the blue lightsaber that belonged to his father, Anakin Skywalker, before he became Darth Vader.

Luke was given the blue lightsaber by Obi-Wan Kenobi in A New Hope but lost it during his duel with Darth Vader on Cloud City in The Empire Strikes Back. It was then given to Rey by Maz Kanata in The Force Awakens, but shattered during Rey’s standoff with Kylo Ren in The Last Jedi.

This led some fans to wonder why director Rian Johnson chose to have Luke use it just a few scenes later. However, during an interview with IGN that was published on Wednesday, Johnson revealed there was a very good reason behind the decision.

“[Luke] is basically tailoring this projection to have maximum effect on Kylo,” he explained. “He knows that Kylo’s Achilles heel is his rage, and so that’s why he kind of makes himself look younger, the way Kylo would’ve last seen him in their confrontation at the temple and that’s why he decided to bring Kylo’s grandfather’s lightsaber down there — the lightsaber that Kylo screamed at Rey, ‘That’s mine, that belongs to me.'” 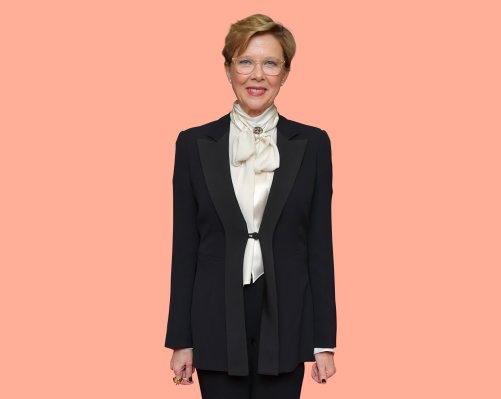 Annette Bening on Playing Gloria Grahame and Sexual Harassment in Hollywood
Next Up: Editor's Pick