'I Am So Sorry, Dylan.' Mira Sorvino Apologizes to Dylan Farrow for Working With Woody Allen

Actress Mira Sorvino attends the premiere of "Mothers and Daughters" at The London on April 28, 2016 in West Hollywood, California.
Jason LaVeris—FilmMagic
By Samantha Cooney

Mira Sorvino has joined a growing list of actors who say they regret working with Woody Allen.

Sorvino, who won an Academy Award for appearing in Allen’s 1995 Mighty Aphrodite, apologized for working with Allen in an open letter to Dylan Farrow published on HuffPost on Wednesday night.

More than two decades ago, Farrow accused Allen, her adoptive father, of molesting her when she was seven. Allen has long denied the allegation.

Mira Sorvino said that she grew up admiring Woody Allen’s work. But after Sorvino spoke to Farrow’s brother, Ronan, about her own sexual harassment allegations against Harvey Weinstein, she said she learned more about Farrow’s allegations. She said that “publicly available details of the case . . . made me begin to feel the evidence strongly supported your story.”

“I am so sorry, Dylan,” Sorvino wrote. “I cannot begin to imagine how you have felt, all these years as you watched someone you called out as having hurt you as a child, a vulnerable little girl in his care, be lauded again and again, including by me and countless others in Hollywood who praised him and ignored you.”

Farrow thanked Sorvino for her letter in a tweet sent Wednesday morning. “I am overwhelmed and my gratitude to you cannot be expressed sufficiently in words. This letter is beautiful and I will carry your words with me,” Farrow wrote. “Your courage has been boundless and your activism an example for us all. From the bottom of my heart, thank you.”

In the wake of the #MeToo movement, Dylan Farrow wrote an op-ed for the Los Angeles Times, criticizing Greta Gerwig, Blake Lively, Kate Winslet and other actors for working with Allen. Gerwig, Ellen Page, Griffin Newman and David Krumholtz have said in recent months they regret working with the director.

“It is difficult to sever ties and denounce your heroes, your benefactors, whom you fondly admired and felt a debt of gratitude toward for your entire career’s existence,” Mira Sorvino wrote. “Even if you love someone, if you learn they may have committed these despicable acts, they must be exposed and condemned, and this exposure must have consequences. I will never work with him again.” 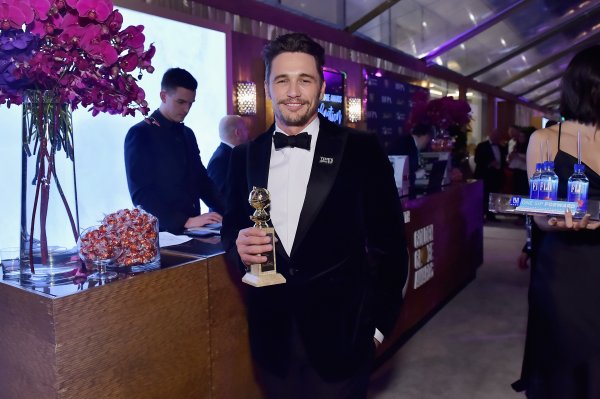 5 Women Accuse Franco of Inappropriate Behavior
Next Up: Editor's Pick