'A Lot Is Still So Much the Same': Misty Copeland on Decades of Racism and Ballet

Misty Copeland (right) and Raven Wilkinson at the Urban World Film Festival in New York, NY, on Sep. 27 2015.
MediaPunch/REX/Shutterstock
By Olivia B. Waxman

In the years since she became the first black ballerina to be a principal dancer with the American Ballet Theatre, Misty Copeland has become a well-known symbol of breaking down barriers in her art. The strides she has made build on the work of one particular dancer — a mentor of Copeland’s, Raven Wilkinson, who broke new ground in similar ways during the 1950s. And, though much has changed since that era in both civil rights and on the stage, Copeland tells TIME that there is still a long way to go.

Wilkinson’s passion for ballet began at an early age and would take her around the nation with the Ballet Russe de Monte Carlo. As the first African American ballerina to dance with a major touring troupe, she performed the coveted solo waltz in Les Sylphides.

But her story — which is told in the new picture book Trailblazer: The Story of Ballerina Raven Wilkinson, written by Leda Schubert and illustrated by Theodore Taylor III, and released Tuesday in time for Black History Month in February — didn’t always feel like a fairy tale.

Wilkinson, now 82, risked death and arrest by touring with the company in the South during a period when it was illegal for black and white dancers to share a stage. Though circumstances have changed in the years since then, the saga of what she went through is still relevant to today’s dancers, says Copeland.

As a native New Yorker, Wilkinson grew up only seeing the Ku Klux Klan in newsreels at the movie theater. It was through dance that she had her first real-life encounter with the group, in 1957 in Montgomery, Ala, while her company passed through the city on tour.

“It looked like it was snowing out, but actually, the KKK were everywhere. There was a convention,” Wilkinson recently recalled to TIME. “The [hotel] manager said, ‘You can’t dance tonight. Go to your room, stay in your room, lock the door, and don’t come out and don’t let anybody in.'” There, she saw a cross burning outside her window. She says wouldn’t have been able to get through those tense moments without her fellow dancers in the company. “If they thought danger was approaching, they’d say something to me in French or Spanish, so I’d be aware,” she says.

After a brief stint in a convent to reflect on the path she had chosen, she moved to Europe, where it was easier for her to dance professionally. She danced with the Dutch National Ballet in Holland before returning to the States in 1974, where she danced with the New York City Opera until her retirement at age 50.

These days, Wilkinson lives steps from Manhattan ballet mecca Lincoln Center — and, though she doesn’t dance anymore, she has been mentoring others, most famously Copeland.

When TIME asked Copeland what has changed since Wilkinson was dancing professionally, she said “a lot is still so much the same” as it was when her mentor went through it.

“A lot of dancers in my generation have been told the same things she has been told,” Copeland told TIME. “The one difference is that the world outside ballet has changed. We won’t be told to leave the company because our safety is at risk, but I had a similar experience being told to pancake my skin a lighter color to fit in with the rest of the company. I’ve talked to so many dancers who have had it even worse than [what] I’ve experienced. Raven and I both have a light complexion, but darker dancers have experienced much worse.”

Times like those are when the younger ballerina remembers her mentor’s resilience.

“She’s been through so much more than I could ever imagine, in the 1950s and experiencing racism in that time. It just felt like, I can do this,” Copeland says. “It made me feel really empowered not to let the negativity of racism even to this day affect me and my career. I can be strong and persevere and allow my talent to shine beyond the color of my skin.” 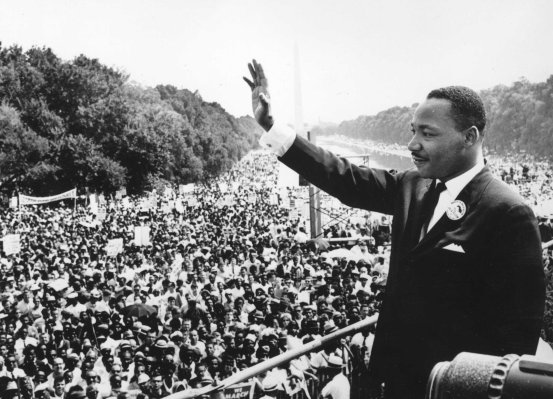 Why Martin Luther King Jr.'s Lessons About Peaceful Protests Are Still Relevant
Next Up: Editor's Pick