Leuit. General H.R. McMaster
Mark —Getty Images
Ideas
By James Stavridis
Admiral Stavridis (Ret.), a TIME Contributing Editor, was the 16th Supreme Allied Commander at NATO and is an Operating Executive at The Carlyle Group. His new book is 2034: A Novel of the Next World War. His previous nonfiction book was Sailing True North: Ten Admirals and the Voyage of Character

Just before Christmas, the White House issued the new national-security strategy of the U.S. Having participated in drafting many similar documents during my multiple tours of duty as a strategic planner in the Pentagon and later as a four-star combatant commander, I know the process well–but I didn’t know what to expect from the Trump Administration. Would this document reflect the mercurial, confusing and conflicted personality of the President?

Thankfully, the basic document is surprisingly centrist, professionally written and largely balanced in terms of reflecting a reduced role for the U.S. in the world. It signals an abiding willingness to work with allies, partners and friends to address global challenges. As Lieut. General H.R. McMaster, the National Security Adviser, said to me just before it came out, “‘America first’ doesn’t have to mean ‘America alone.'” The document reflects that approach, and if implemented by sensible leaders at all departments, it will not do significant damage to the nation’s security. What’s important–and potentially dangerous–is what’s left unaddressed.

The document outlines four key “pillars” for our security. The first is “Protect the American People, the Homeland and the American Way of Life,” something no one argues with in general terms. The section does layer in some of the political rhetoric, notably about building a wall, that makes little pragmatic sense but appeals to Trump’s base. A second pillar is “Promote American Prosperity,” and this section focuses on economic tools available to the nation. This section pillories previous trade agreements and touts the need for “energy dominance.”

The third pillar is “Preserve Peace through Strength,” and includes the mandate for a strong, capable and global military–essentially validating campaign rhetoric. The final pillar is “Advance American Influence,” and concentrates on how diplomacy, development and strategic communication can help create security. This is the soft-power nod, which is welcome but strangely at variance with actual budgetary and policy decisions by the Trump Administration thus far. None of this is particularly controversial or new, and given the tendencies of the Trump Administration in its first year in office, that is a net positive.

But the strategy misses in four key areas, and therefore falls short. First, any reference to climate change and global warning is missing. This is a significant shift in U.S. policy, as both the Bush and Obama Administrations rightly highlighted the need to plan for climate change as a national-security threat. Multiple studies have shown the connection between climate change and unrest in drought-stricken areas from Mali to Syria. Global warming is melting Arctic ice and will create competition and tension among Arctic powers, notably including Russia and the five NATO nations that border the Arctic. The need to respond to increasingly erratic and dangerous weather will strain military resources. Rising sea levels will eventually swamp vital ports. And perhaps most important, the U.S. decision to be the only nation on earth standing outside the Paris Agreement is simply bad leadership.

Second, the strategy for Russia and China is too simplistic and doesn’t differentiate between the two very different powers. It simply calls them both out as “revisionist powers,” effectively lumping them together without a plan. Russia is a minor economy, but a massive nuclear military power. It is a nation in decline by almost any metric, but still has the ability and inclination to be a spoiler in almost any setting. Its leader despises the U.S. and NATO, and will do anything to undermine the transatlantic alliance. China, of course, is a massive economy that will overtake the U.S. soon in terms of sheer size. China continues to expand its military capability and influence, and may step into the U.S. role as the organizing power for the geopolitical world. With Russia we can be tactical and transactional; with China we must be strategic. The stakes could not be higher.

Third, while the strategy mentions cybersecurity in several places, it does not put sufficient emphasis on how deeply intertwined our entire economy is in cyberspace, nor how dangerously vulnerable we are in terms of the electric grid, our electoral process, the inner workings of our chips and other crucial elements of national cyberinfrastructure. A bolder plan here would have outlined the need for a Cabinet-level officer to oversee cyber, for example. We have Secretaries of Agriculture, Interior and Commerce; but no one focused like a laser on cybersecurity.

Finally, trade as an instrument of geopolitical influence gets little attention. Given that the Administration’s views on trade are negative and protectionist, this is no surprise. But the strategic miss is walking away from the idea of broad area trade agreements, such as the Trans-Pacific Partnership, to advance our strategic interests. A better strategy would be to use such arrangements to extend U.S. influence, especially in Asia. China will be more than glad to fill the vacuum–something they are aggressively doing.

There will be plenty of opportunities for the Administration to correct these deficiencies. The strategy is only a very rough blueprint. General Eisenhower, a career soldier who knew a little something about planning, would often say, “Plans are worthless, but planning is everything.” What he meant was that no national plan survives contact with global reality, and will frequently have to change; but that the bonding process of teams working together to create a coherent strategy is what allows an institution to ultimately meet the harsh headwinds of the world. How will the Trump Administration weather those? Stay tuned. 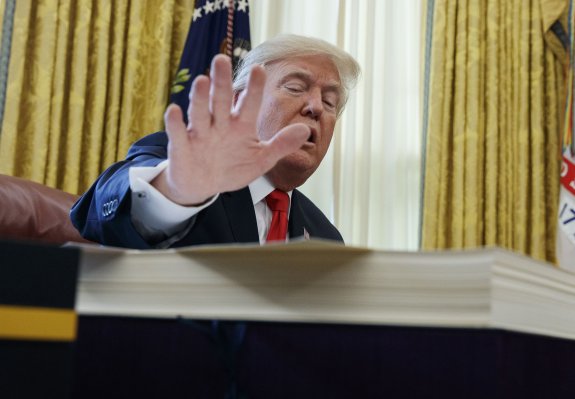