At a joint press conference with Norwegian Prime Minister Erna Holberg, Trump said that he would not sign any legislative fix on this issue that did not include funding for a border wall. “Its got to include the wall,” he said. “We need the wall for safety. We need the wall to stop the drugs from pouring in.”

“Any legislation has to include the wall,” he continued. “because without the wall it all doesn’t work.”

The comments, which reiterate sentiments he uttered on Tuesday night, mark a swift turnaround for the President, who just one day earlier had hosted a bipartisan group of of lawmakers at the White House to discuss possible compromises on Deferred Action for Childhood Arrivals, the Obama-era program that defers deportation for undocumented immigrants who came to the country as children.

At that meeting, Trump appeared to agree to passing a DACA solution before turning to immigration reform. When Sen. Dianne Feinstein asked Trump about executing this strategy, Trump responded, ” I would like to do that. Go ahead. I think a lot of people would like to see that, but I think we have to do DACA first.”

His response appeared to alarm some members of his own party, including Republican House Majority Leader Kevin McCarthy. “Mr. President, you need to be clear though… We have to have security, as the Secretary would tell you,” McCarthy said.

Later that night, Trump took to Twitter to clarify his support for a border wall. “Our country needs the security of the Wall on the Southern Border, which must be part of any DACA approval,” he wrote. 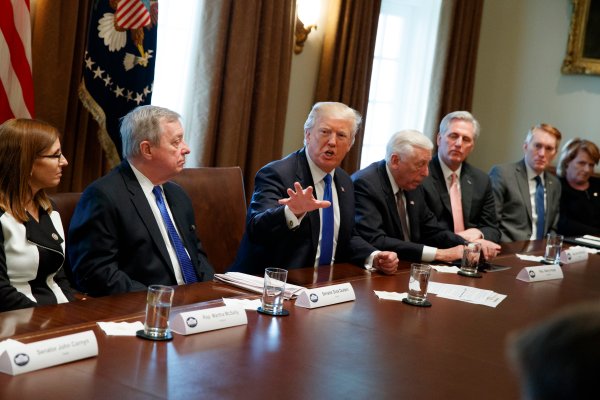