It was one of the most important things Elon Musk has ever launched into space: a government satellite so shrouded in secrecy that virtually everything about it is classified.

Only now, what was supposed to be a triumph for Musk and his Space Exploration Technologies Corp. has turned into a potential setback after the satellite went missing. The episode is also shaping up as a test for the billionaire’s ambitions in space — especially SpaceX’s hard-won ability to compete for military missions.

“They’re concerned any failure might hinder their ability to get future national security launch contracts,” said Brian Weeden, the director of program planning for the Secure World Foundation, a space-policy think tank. “National security payloads are a very important potential market for SpaceX.”

Details are scant and it’s far from clear who, if anyone, is at fault. But this much is certain: Zuma, perched atop a SpaceX Falcon 9 rocket, streaked across the Florida sky from Cape Canaveral on Sunday evening and the first stage returned safely to land. Cheers went up inside SpaceX Mission Control, in Hawthorne, California.

But something went wrong. By Monday evening, Zuma was presumed lost.

Gwynne Shotwell, the chief operating officer of SpaceX, issued a strongly worded statement on Tuesday that placed the blame elsewhere.

“After review of all data to date, Falcon 9 did everything correctly on Sunday night,” Shotwell said. SpaceX declined to comment further, citing the mission’s classified status, as did Northrup Grumman Corp., which hired SpaceX as the launch contractor.

SpaceX’s review so far indicates that “no design, operational or other changes are needed,” Shotwell said. The company doesn’t anticipate any impact on its upcoming launch schedule, including a Falcon 9 mission in three weeks.

“There’s a long tradition of not commenting on problems with classified missions, unless it blows up in such a way that everyone can see it,” said John Logsdon, founder and former director of the Space Policy Institute at George Washington University.

“There will be at least three investigations. SpaceX will follow through to make sure they were not part of the problem,” he said. “There will be an internal investigation at Northrup Grumman. And the sponsoring agency will do an investigation. No matter what Zuma was, it was expensive. A billion dollars is not out of the ball park.”

Whatever the cause, the mishap could scarcely come at a worse time for Musk. Just days before Sunday’s launch, his flagship public company, Telsa Inc., once again pushed back its production target for its pivotal Model 3 sedan. The move raised questions about whether the electric-car company would need to raise cash.

Closely held SpaceX, meanwhile, is heading into what is due to be a busy year. The company has said it plans about 30 missions in 2018 after completing a record 18 last year.

SpaceX is slated to demonstrate the maiden flight of Falcon Heavy, a larger and more powerful rocket, later this month. And along with Boeing Co., it has a contract with NASA to fly astronauts to the International Space Station as part of the “Commercial Crew” program, with the first crucial test flight scheduled for the second quarter.

Contracts for military launches include satellites that let troops communicate on battlefields and are estimated to be valued at about $70 billion through 2030. 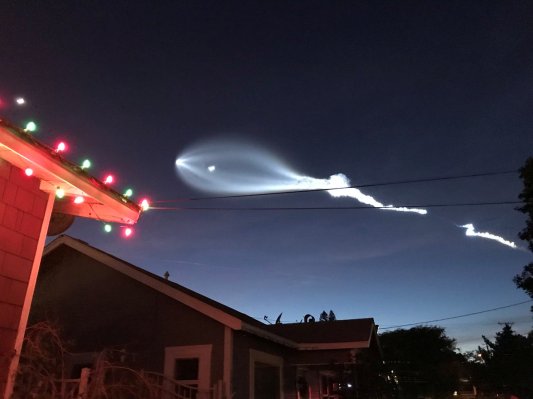 People in L.A. Definitely Thought This SpaceX Rocket Launch Was Aliens
Next Up: Editor's Pick