'Their Brain Just Fries.' Australian Weather Is so Hot That Bats Are Boiling to Death

Australia has been roiled by a vicious heat wave this past week, with thermostats in Sydney reaching 117 degrees on Sunday, making it the city’s hottest day since 1939. Across the country, as firefighters beat back brushfires near Melbourne and a section of highway asphalt turned into ooze, everyone is struggling with the heat — including animals.

In southern Queensland, bats are falling out of trees due to the heat, with as many as 100,000 flying fox bats from 25 separate colonies estimated to have died over the weekend, the Royal Society for the Prevention of Cruelty to Animals told Australia’s ABC News.

According to a local environmental and animal rights group, more than 400 flying foxes — a type of fruit bat — died on Sunday in the Sydney suburb Campbelltown as the overheated mammals fell out of trees or abandoned their young to search for water to drink or drench their fur to help cool down.

The bats struggle to regulate their internal body temperatures when the heat rises above 104 degrees, and habitat loss has driven them further from life-saving lakes and rivers. Large-scale die offs could have other ecological consequences, as the the bats play an important role in plant pollination in eastern Australia, according to the Washington Post.

Meanwhile in the U.S., animals were forced to contended with extreme temperatures on the opposite end of the thermometer as a bomb cyclone froze the Northeast with icy winds and historic cold weather. In Florida, where temperatures dipped below 40 degrees last week, it was so cold that iguanas were falling out of trees. At one North Carolina park, alligators were trapped in a frozen swamp, their snouts jutting above the water line to help the hibernating reptiles breathe, the Washington Post reported. 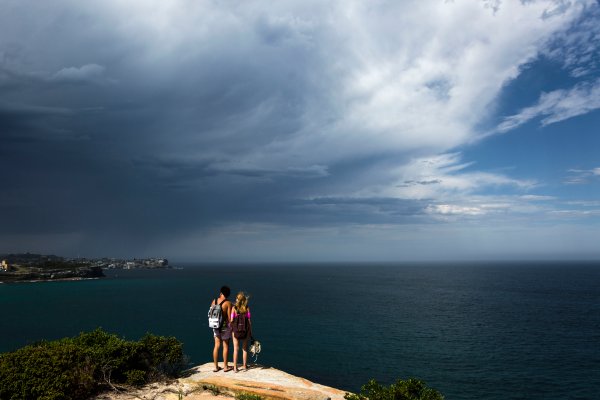 Sydney, Australia, Hit 117 Degrees While the U.S. Froze This Weekend
Next Up: Editor's Pick