Republican Rep. Steve Alford of the Kansas House apologized for comments he made last week linking the character and genetics of black people to marijuana.

“I was wrong, I regret my comments and I sincerely apologize to anyone whom I have hurt,” Alford said in a statement Monday, according to the Topeka Capital-Journal.

Alford, who has served in the state’s legislature since 2011, said on Saturday at a town hall that black people had a lower tolerance for marijuana because of the their “character makeup” and “genetics,” the Garden City Telegram first reported.

“Basically any way you say it, marijuana is an entry drug into the higher drugs,” Alford said in response to a suggestion that pot legalization could raise money for the state of Kansas, according to the Telegram. “What you really need to do is go back in the ’30s, when they outlawed all types of drugs in Kansas [and] across the United States.

“What was the reason why they did that?” he continued. “One of the reasons why, I hate to say it, was that the African Americans, they were basically users and they basically responded the worst off to those drugs just because of their character makeup, their genetics and that.”

Several of Alford’s fellow lawmakers were stunned by the comments, according to the Capital-Journal.

“I think that is outrageous,” said Sen. Oletha Faust-Goudeau, a Democrat from Wichita, the Capital-Journal reported. “For a sitting state representative to say that, I just can’t believe it. You can’t put everybody into one category. He should be more of a statesman and get facts.”

Prior to his apology Monday, when the Telegram asked for clarification regarding his comments, Alford stood by his initial stance but said that he shouldn’t have single out African-Americans.

“There are certain groups of people, their genetics, the way their makeup is, the chemicals will affect them differently,” Alford told the paper. “That’s what I should have said was drugs affect people differently instead of being more specific.”

Alford did not immediately respond to TIME’s request for comment. 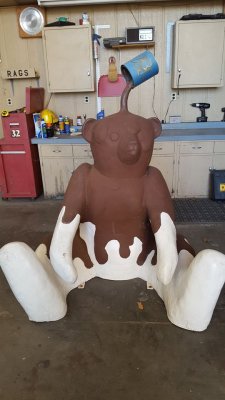 'This Had Become a Running Joke.' Police Recover Bear Statue Stolen From Candy Factory
Next Up: Editor's Pick