The Trump Administration Keeps Trying to Sell Federal Land for Oil Drilling. But Nobody Wants It

Last month, the Trump Administration put more than 10 million acres of land in Alaska on the auction block for oil and gas companies to lease and eventually drill. The move — a key part of Trump’s energy strategy — was billed as the President making good on his promise to bring U.S. “energy dominance” to the rest of the world.

But by the end of the auction the Bureau of Land Management had received only seven bids for land covering 80,000 acres, less than 1% of the area offered. In total, the federal government would collect just under $1.2 million, or $15 per acre. The high cost associated with new drilling projects combined with relatively low oil prices made the area simply an undesirable investment for the industry.

Alaska is not the only place where Trump’s plan to drill has met with tough market realities. The Administration has taken steps to open millions of acres to oil drilling across the country and off the coast of the U.S., from using the tax reform bill as a vehicle to open drilling in the Arctic National Wildlife Refuge to considering most of the waters of U.S. coasts for oil exploration. But analysts and key industry players say it remains uncertain how much of it will actually be developed to produce oil or gas.

“We’ll have to see,” said Jack Gerard, CEO of the American Petroleum Institute, asked about the business case for developing new areas proposed by the Administration for offshore drilling last week. “The market will eventually drive where those dollars are invested: are they onshore? are they offshore? are they in the United States or elsewhere?”

Trump has promised that his shift “unlocks million and millions of jobs and trillions of dollars in wealth,” but the market reality is more complicated. Oil prices remain low enough that pouring billions into exploring vast new areas offshore, in the Arctic and in Alaska — key regions Trump has sought to open to drilling — would be a risky investment. That’s especially the case as fracking in the U.S. remains a relatively cheap and accessible alternative. “The cost of the resource from shale is just more predictable,” says Roger Stern, a faculty fellow at the University of Tulsa’s School of Energy.

More broadly, oil investors have sought to stem overproduction, which has contributed to low prices, rather than finding new sources of supply. OPEC, the oil cartel that represents 14 oil producing countries including Saudi Arabia, the world’s second-largest oil producer after the U.S., has pushed production cuts. In the U.S., investors told shale oil and gas producers to focus on profits rather simply generating more of the product, according to a Wall Street Journal report.

In the longer term, oil and gas projects can take more than a decade to develop, analysts say oil companies remain concerned about whether demand will stagnate. Policies fighting climate change and the rise of the electric vehicle could both shrink demand. A 2017 report from the International Energy Agency shows global oil demand continuing to grow through 2040, but at a markedly slower pace.

Oil and gas companies nonetheless cheered Trump’s move. The companies that purchase the right to drill despite low demand tend to be the big oil giants that can afford the risk. Those companies could hoard some leases in case prices do recover and will be positioned for a windfall profit if they do. This means the government may forego opportunity for profitable auctions in the future while all but giving away the right to drill on public land today, says Hillard Huntington, executive director or Stanford University’s Energy Modeling Forum

“I’m not against developing these areas,” says Huntington. But “if the government sells the leases, I’m not sure how much money they’re going to get at this point. They could be sold at a relatively low fee, which would not be good for American citizens.”

No matter the market conditions, Trump’s presidency has largely been a win for the oil and gas industry. Regulations have been cut back, oil companies could soon have unprecedented access to land long out of their reach and, perhaps most significantly, at least in the short term, oil companies by and large received a massive tax cut.

But for now, the plan to sell them federal land for drilling is not a big win. 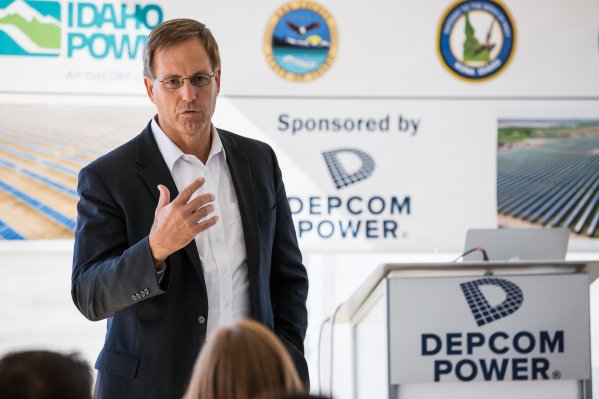 A Coal Executive Switched to Building Solar Plants. Now He's Worried Trump Will Hurt His Business
Next Up: Editor's Pick