Emma Stone’s black dress wasn’t the only thing she used to make a statement for the Time’s Up movement at the 2018 Golden Globe Awards. The star also worked with her hair and makeup team to make a statement with her beauty look as well – and the pros behind the look shared the scoop with PeopleStyle.

“Once I heard about the idea of women coming together and wearing black to the ceremony, and the message behind it, my friend Arianne [Phillips] designing the Time’s Up pin and what the message is, I wanted the makeup to have a message as well,” makeup artist Rachel Goodwin, Nars Director of Pro Artistry and Red Carpet, tells PeopleStyle of the looks she designed for Stone and Game of Thrones’ Lena Headey.

So the pro turned to history, and landed on shades worn by 19th-century feminists. “I thought, red lipstick was a color suffragettes wore, so I did more research and found that they also wore very specific, symbolic sashes, pins, petticoats and all these things in purple, emerald green and white when they were fighting for the right to vote.”

With that in mind, Goodwin created a look on Stone (who attended with tennis legend Billie Jean King) that included all three of the symbolic shades: emerald green and white on her lids and violet on her lips. “I wanted to give the beauty look that had more meaning to me that was far beyond mascara and lipstick,” she says.

Goodwin used a dark emerald Nars pencil on Stone’s top and bottom lash lines, and layered a green shade from the brand’s limited-edition Man Ray palette on top, creating a graphic smoky eye with white shadow on her inner corners to represent “purity.” She completed the look with a mauve-y toned lipstick on her lips and cheekbones.

As for her hair, hairstylist Mara Roszak shares that she was going for a look that made Stone feel confident — and pulled inspiration from the “elegance” in her black lace Louis Vuitton dress.

“Emma is so authentic in every way and in everything she does. I always want her to feel like herself,” Roszak said. “And I want women to feel like themselves when I’m working with them. I want them to feel confident and for the look to represent who they are and I think now more than ever, that’s necessary. I don’t think women need to be told how they should look.”

Roszak blew Stone’s hair smooth and added height at her roots with Living Proof Full Root Lift spray, before creating waves all over with a 1” curling iron. The pro then wrapped everything into a french twist at the back, and locked it into place with the Living Proof Flex Shaping Hairspray.

And Goodwin and Roszak both felt the import of this particular red carpet, after working together with Stone on dozens.

“Any other red carpet there’s a sense of levity and light and kind of frivolity,” Goodwin said. “At the end of the day the woman needs to feel beautiful, but this one was really different because it did feel more meaningful. I wanted it to be a statement, still make her feel beautiful, but this night had a bigger meaning, and this was a different way of approaching it.”

The 75th annual Golden Globes were presented live on NBC from the Beverly Hilton in Beverly Hills, California, on Sunday.

To donate to the Time’s Up Legal Defense Fund, which will provide subsidized legal support to women and men in all industries who have experienced sexual harassment, assault, or abuse in the workplace, visit its GoFundMe page. Learn more about Time’s Up, an organization of women in entertainment combating sexual harassment and inequality, on its website. 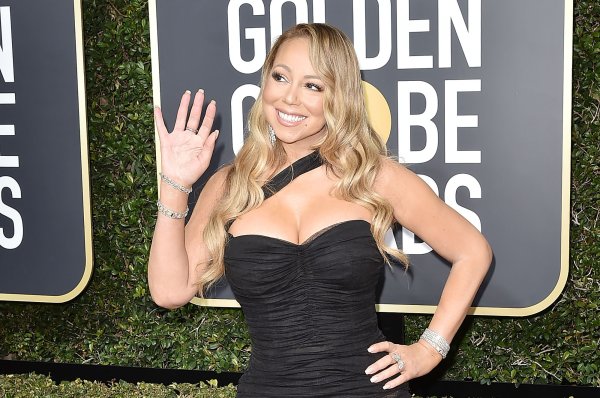