Hackers have attempted to target organizations involved in the 2018 Winter Olympics, which are set to kick off in Pyeongchang, South Korea next month, according to cybersecurity firm McAfee.

An email campaign, conducted between Dec. 22 and 28 last month, sent infected documents to Olympic associations from an email that was designed to appear as though it came from South Korean authorities, analysts with McAfee’s Advanced Threat Research division found.

The targeted organizations included a range of groups involved in providing infrastructure or support for the Pyeongchang Games, including an ice hockey association. McAfee did not identify who was responsible for the attack.

“The attackers appear to be casting a wide net with this campaign,” McAfee wrote in a blog post.

The firm said attackers implanted malicious software in a Korean-language Microsoft Word document attached to the email, which was titled “Organized by Ministry of Agriculture and Forestry and Pyeongchang Winter Olympics.”

The messages, which McAfee traced to an IP address in Singapore, were also made to appear as though they were sent by South Korea’s anti-terror body. Adopting government aliases helped create the impression that the message was legitimate, McAfee said.

McAfee found a log that indicated some targets in South Korea had likely been infected.

“With the upcoming Olympics, we expect to see an increase in cyberattacks using Olympics-related themes,” McAfee said, noting that previous cases had focused on obtaining targets’ passwords and financial information.

South Korea has earmarked $1.3 million for cybersecurity protection for the Olympics, recruiting a dedicated team to foil hacking attempts, Reuters reported in September.

McAfee’s announcement was made just days before North and South Korea are set to meet for a high-level discussion on Olympic cooperation. 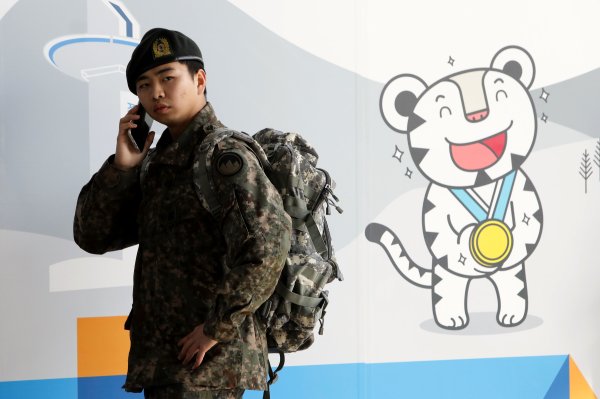