She’s a multi-Platinum, Grammy-winning superstar of pop music, but on the red carpet at Sunday’s Golden Globe Awards, Kelly Clarkson was just another fan freaking out over meeting Meryl Streep.

“Oh my God, that’s Meryl! That’s Meryl Streep!” the American Idol winner exclaimed upon spotting the Oscar-winning actress at the tail end of an interview with E!‘s Ryan Seacrest live at the event.

Clarkson, previously announced as a Golden Globes presenter at the 2018 ceremony, proceeded to profess her love for Streep before asking permission to meet her.

Streep then embraced Clarkson with a warm smile and a quick hug, later cradling the singer-songwriter’s head in her hand before engaging her and fellow actress Michelle Williams in conversation.

Earlier this weekend, Clarkson fantasized about meeting Streep at the event in a Facebook Live session with her fans.

“Meryl Streep has four children, and I have four children, and I think that’s cool. … One of her daughters has the same birthday as one of my daughters, River. June 12!” Clarkson said in the video Saturday. “That sounds creepy [that I know that]. I hope she doesn’t run from me tomorrow! I just really love her. I feel like we can be friends.”

Watch Clarkson meet Streep in the video above. 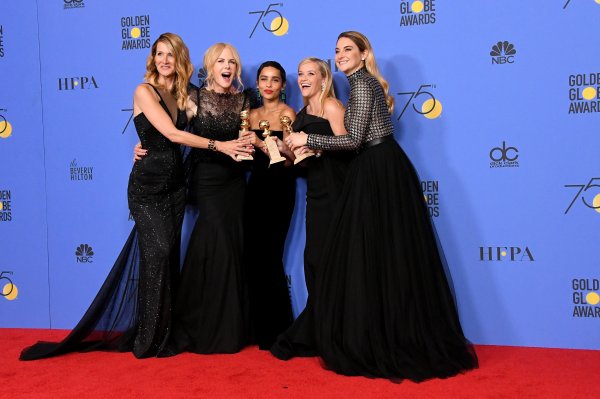 See Every Black Dress on the Red Carpet at the 2018 Golden Globes
Next Up: Editor's Pick