'Women Are Just as Valuable As Men.' Debra Messing Calls Out E! for Allegedly Not Paying Catt Sadler Equally

Debra Messing is speaking her mind.

During an interview with Giuliana Rancic on E!’s 2018 Golden Globes red carpet broadcast on Sunday, the Will & Grace actress called out the network for allegedly not paying its former E! News co-host Catt Sadler equally.

After 12 years, Sadler, 43, opted to leave E! News last month after she found out her male co-host Jason Kennedy was making, according to her, “double” her salary “and has been for several years.” (E! said it “compensates employees fairly and appropriately.”)

Like many stars at this year’s Golden Globes, Messing, 49, opted for an all-black outfit to make a statement about the epidemic of sexual harassment in the entertainment industry and beyond.

Rancic, 43, opened their interview by asking the actress about her decision, and Messing said she wore black “to thank and honor all of the brave whistle-blowers who came forward and shared their stores of harassment and assault and discrimination.”

“I’m wearing black to stand in solidarity with my sisters all over the globe, and I’m wearing black to celebrate the rollout of this incredible initiative, Time’s Up,” Messing continued, referencing the organized campaign which aims to fight sexual harassment, assault and inequality for women in all kinds of workplaces. (It has raised more than $15 million for a legal defense fund for people who have experienced workplace harassment and is encouraging Globes attendees and supporters everywhere to wear black as a show of unity and power.)

“Time is up and we want diversity and we want intersectional gender parity,” Messing told Rancic. “We want equal pay, and I was so shocked to hear that E! doesn’t believe in paying their female co-hosts the same as male co-hosts. I mean, I miss Catt Sadler, so we stand with her, and that’s something that can change tomorrow. We want people to start having the conversations that women are just as valuable as men.”

To donate to the Time’s Up Legal Defense Fund, which will provide subsidized legal support to women and men in all industries who have experienced sexual harassment, assault, or abuse in the workplace, visit its GoFundMe page. Learn more about Time’s Up, an organization of women in entertainment combating sexual harassment and inequality, on its website.

Rancic moved on to the next question, opting not to address Messing’s Sadler comment.

Sadler previously opened up to PEOPLE exclusively about her decision to exit the network, saying that it was “heartbreaking.”

“It’s almost insulting because you know you work really hard,” she said. “I’ve given my all to this network. I’ve sacrificed time away from my family and I have dedicated my entire career to this network. And when you learn something like that, it makes you feel very small and under-appreciated and undervalued.”

A source close to the situation, however, maintained to PEOPLE that E! pays female employees fairly.

“The idea of E! not paying women equally couldn’t be further from the truth,” said the source. “Giuliana made more than three times Jason’s salary when they hosted together, and another one of his co-hosts also made significantly more.” (Rancic, a former E! News anchor, left her post in 2015. She remains co-host of the network’s Live from the Red Carpet.)

An E! spokesperson said in a previous statement to PEOPLE, on behalf of both the network and Kennedy, that “E! compensates employees fairly and appropriately based on their roles, regardless of gender.”

“We appreciate Catt Sadler’s many contributions at E! News and wish her all the best following her decision to leave the network,” the spokesperson said.

The 75th annual Golden Globes, hosted by Seth Meyers, are presented live at the Beverly Hilton in Beverly Hills, California, on Sunday. The show airs at 8 p.m. ET on NBC. 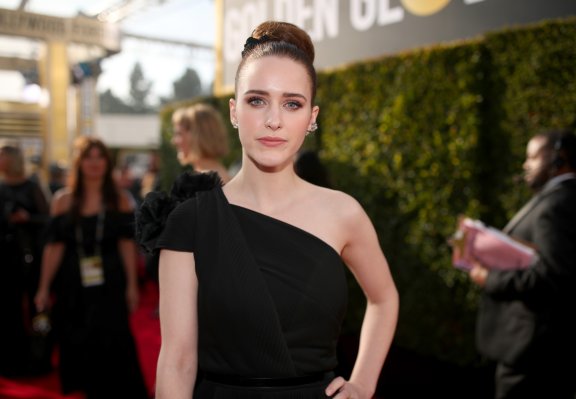 Here's Why Actors Are Wearing Black on the Golden Globes Red Carpet
Next Up: Editor's Pick