In an exceedingly tense interview Sunday morning, a top White House aide continued to deride a new book about the Trump administration while simultaneously downplaying Steve Bannon’s role in it and defending President Trump’s tweets about his intelligence.

CNN’s Jake Tapper, who was conducting the interview with White House Senior Adviser Stephen Miller, cut the conversation off after 12 and a half minutes, telling Miller he was spewing rhetoric solely to gain approval from the President. “There’s one viewer that you care about right now and you’re being obsequious in order to please him,” Tapper said. “I think I’ve wasted enough of my viewers’ time.”

During the interview, Miller characterized the new book about the Trump administration, “Fire and Fury,” which was released Jan. 5, as “a work of very poorly written fiction.”

“The author is a garbage author of a garbage book,” said Miller, explaining that the depiction of the President was contrary to his own experience.

The book contains several explosive allegations, particularly from former White House chief strategist and chief campaign executive Steve Bannon, who told Wolff that the meeting between Donald Trump Jr., Trump’s son-in-law Jared Kushner and then-campaign manager Paul Manafort and a Russian attorney in the summer of 2016 was “treasonous,” and insinuated that Trump had met with the Russians that day. (Miller, who was working for the campaign at the time, said he did not know anything about that meeting). Trump publicly broke with Bannon last week after the remarks were publicized before the book’s publication.

“It’s tragic and unfortunate that Steve would make these grotesque comments so out of touch with reality and obviously so vindictive,” said Miller. “It reads like an angry vindictive person spouting off to a highly discredible author.”

When Tapper pressed Miller about Bannon’s influence in the Trump administration and his role in implementing the first version of the the travel ban, Miller said Bannon’s involvement was minimal, despite the description in Wolff’s book that he wanted the rollout on a Friday “so the snowflakes would show up at the airports and riot.”

“His role has been greatly exaggerated whereas the President hasn’t gotten the due for he deserves for the movement that he put together to tap in to the kinds of people whose life concerns don’t get a lot of attention on CNN,” said Miller.

Miller also staunchly defended the President’s tweets Saturday morning, in which he defended himself as a “very stable genius” and said his two greatest assets throughout his life have been “mental stability and being, like, really smart.”

“It happens to be a true statement,” Miller said of the characterization. “A self-made billionaire who has revolutionized reality T.V. and has changed the course of our politics.”

“I’m sure he’s watching and he will be happy that you said that,” Tapper replied.

Shortly after the interview aired, Trump confirmed Tapper’s prediction. “Jake Tapper of Fake News CNN just got destroyed in his interview with Stephen Miller of the Trump Administration. Watch the hatred and unfairness of this CNN flunky!” he wrote on Twitter. 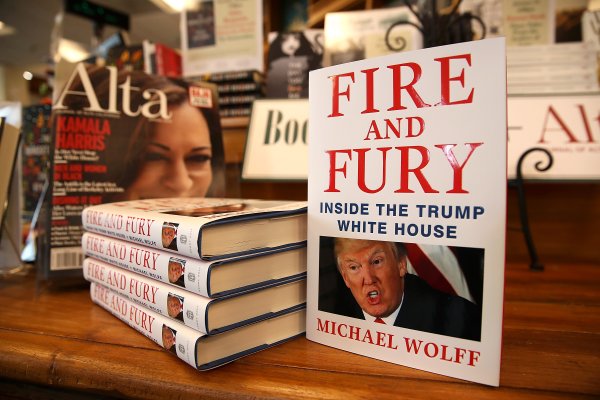 People Are Checking Out 'Fire and Fury' From Libraries as Fast as Harry Potter
Next Up: Editor's Pick