It's Going to Be -100 Degrees on Mount Washington Tonight. Here's What That Feels Like

If you think it’s cold where you live today, just be glad you’re not at the summit of Mount Washington.

Temperatures atop the New Hampshire mountain, which is known for its bitterly cold temperatures and fierce winds, were forecast to sink below -20 degrees Friday, dropping to somewhere between -70 and -80 degrees after accounting for windchill. Overnight, air temperature is set to hit -40 degrees, with 100-miles-per-hour winds causing windchill to hit -100 degrees.

But despite the punishing temperatures, at least three hearty weather observers will be stationed at the Mount Washington Observatory, recording information about air temperature, wind speed, visibility and cloud cover at the summit every hour — manually, since extreme cold destroys most automatic equipment.

Adam Gill, a weather observer and IT specialist at the observatory, told Travel & Leisure what it’s like to work in one of the coldest places on earth.

You can get frostbite in just 30 seconds

When temperatures creep toward -80, Gill says frostbite is an almost immediate concern. Exposed skin can start to get frostbite in as little as 30 seconds, he says, with permanent damage possible after just a couple minutes. And if you step outside with exposed skin, Gill says, you’ll know it immediately. “Your skin starts to burn, kind of like if you’re holding your hand too close to a hot fire,” he says. “When you first step outside, to beathe is more difficult, because the air is cold and dry. It’s kind of like walking outside and walking into super cold water.”

So you have to bundle up

Sometimes you have to shovel — indoors

A noteworthy storm, complete with wind gusts of up to 140 miles per hour, swept the mountain last March, Gill remembers. “That was one of the few times I’ve ever felt the building up here shaking due to the wind,” he says. “We had part of the building fill up with snow because of a crack in the door. We had to shovel inside the building, which is unusual.”

Even weather observers get tired of the cold

While Gill says he’s not scared of the mountain’s extreme cold — “probably most people would be, but a lot of us are up here for this extreme weather, so it’s kind of fun” — it does get old sometimes. “Last week when we were up here, we had three or four days in a row where the temperatures didn’t get above -20,” he says. “By the third or fourth day, it was just kind of like, ‘I can’t wait for it to get warmer, or to get off the mountain to get to the valley, where it’s at least zero.’ ”

But they have pretty good ways to warm up

Gill says he often hops on an exercise bike for about five minutes after taking weather measurements outside. The best way to warm up, though, is by hanging with the crew’s cat, Marty, who lives at the observatory year-round. But don’t worry: Gill confirms Marty is strictly an indoor pet. 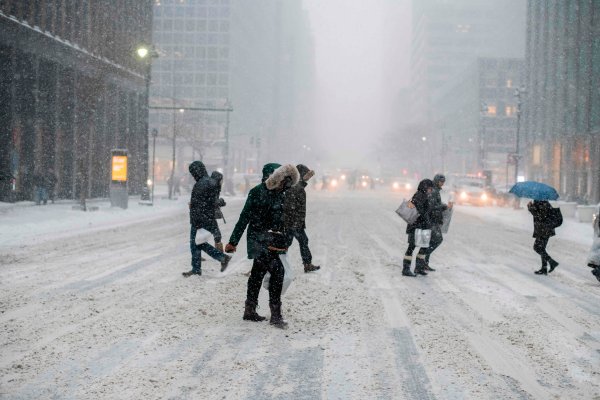 Here's How Much Snow the the East Coast Got
Next Up: Editor's Pick