The Government Could Shut Down in Two Weeks. Here's Why It Would Be Disastrous for Trump

House Speaker Paul Ryan looks on as President Donald Trump speaks about tax reform legislation during a meeting with members of the House Ways and Means Committee in the Cabinet Room at the White House, November 2, 2017 in Washington, DC.
Drew Angerer—Getty Images
By Philip Elliott

During a fight over a spending bill last year, President Donald Trump tweeted that the federal government needed “a good shutdown” to force Democrats to cooperate. But as Congress steams toward a Jan. 19 deadline to prevent a government shutdown in 2018, there’s strong evidence from history that there is no such thing as a “good shutdown” for the White House.

In fact, anyone sitting in the Oval Office during a government shutdown tends to fare poorly when their party faces voters next during national elections, especially when they are midterms, according to a TIME analysis of the 18 government shutdowns that have taken place since modern budgeting rules went in place. In fact, a government shutdown heading into a midterm election makes the losses facing the party in power twice as deep in the House — a harrowing threat for the current GOP majority that already appears to be in peril this fall.

In general, government shutdowns are bad for the United States. Billions in productivity evaporates as much of government grinds to a halt, it’s more expensive to shut the doors than to keep them open and the political fallout spares no one in the next elections.

Presidents’ first midterm elections often prove devastating anyway. In the last 100 years, the sitting president’s party has lost, on average, a net of 35 House seats in all but two election cycles. That’s more than the 24 seats Democrats need this year to reclaim the House and gain the ability to thwart Trump’s legislative agenda while bolstering investigations into his conduct.

In the Senate, the losses during midterms have been to the tune of five seats. Republicans currently have a 51-49 majority there, although they have a geographic advantage in the seats on the ballot this fall.

Limiting the scope to the elections since the 1974 Congressional Budget Act put in place a more predictable way to fund government, the sitting president’s party tend to lose 26 House seats during their first at-bat with Congress in play, and three in the Senate. Setting aside the 2002 results, when President George W. Bush was still popular in the wake of the Sept. 11, 2001, terror attacks and his Republican Party picked up seats, that number climbs to an average net loss of 28 seats in the House. Only twice in that window have Presidents’ parties gained seats in the Senate: one each in 1982 and 2002.

In other words: Trump is playing with not just matches, but blowtorches if there’s a government shutdown this year, just as many in Washington fear could unfold as the White House is consumed with Michael Wolff’s new book, Fire and Fury — a juicy, tell-all book that that makes bombshell allegations against him and his inner-circle. If the Trump takes his eye off the ball — the nuts and bolts of running a federal payroll that could be as high as 9 million people — could slip through the cracks and leave already-confident Democrats in even better shape.

So consuming are the embarrassing tiffs that Trump’s session on Thursday with GOP leaders produced few headlines beyond the president’s latest reaction to one-time adviser Steve Bannon. Every minute Trump spends fighting the gossipy disclosures in a book that just came out today, Jan 5., he’s making it easier and easier for Democrats to win the House and, maybe, the Senate.

The 2018 midterm elections are still a long ways away in voters’ minds, but strategists in both parties are laying the groundwork for a potential electoral backlash against Trump and his party. Smart minds on both sides see a potential wave election looming for the House and Senate, with a shutdown only boosting the odds. In fact, 34 Republican members of the House have opted to retire rather than run again, and four in the Senate have done the same.

Political strategists generally caution against shutdowns. There’s a reason there was an 18-year window between the two most recent government ones: they bring political mayhem to the party in the White House. Congress takes a temporary hit, but the public seldom knows — or cares — who runs that end of Pennsylvania Avenue. Americans, on the other hand, always know who is in the White House and perceive the presidency as all-powerful and responsible for everything happening in Washington.

Consider the 2013 government shutdown. Republicans, led by Tea Party darling Ted Cruz, shut down the government with a demand to scrap Obamacare. It was a fool’s errand, his party’s leadership warned, because there is no way the president would sign legislation to repeal his signature domestic achievement. Cruz ignored the advice, forced a shutdown that cost the economy as much as $6 billion in lost output and tanked the party’s standing in the polls in the short term. The GOP brand was a drag on the off-year elections, likely costing them race for governor of Virginia.

But the effects were short-lived. A year later, the Republicans picked up 13 seats in the House and nine in the Senate.

The government shutdown trials spare neither party and, on their own, are not a cause of political shifts. When Jimmy Carter oversaw the 11-day government shutdown in 1979 — his fifth — voters responded by booting him from office and with him Democrats in Congress; a net loss of 12 in the Senate and 34 in the House.

Ronald Reagan oversaw eight government shutdowns during his eight years in office. His party lost a net 11 Senate seats in cycles featuring a shutdown, and a net deficit of 28 seats in the House.

Shutdowns of government — or “spending gaps” as the chaos on the Hill is known — are relatively new occurrences. The budgeting reforms of the 1970s set up potential government showdowns that evolved into high-stakes brinksmanship. There have been 18 distinct shutdowns since 1976, some as short as a day and some as long as 21 during the second of Bill Clinton’s government shutdown. The average length is seven days, although the costs can top billions in lost productivity for the economy.

That hasn’t stopped Trump from wanting one of his own. The tweet about a “good shutdown” earlier this year came just a little after 8 a.m. and sent his team into overdrive to argue that they did not want that. “A shutdown is not the goal,” budget chief Mick Mulvaney told reporters. Others in the White House argued that the president didn’t really mean what he tweeted.

But as it looks like Trump is getting closer to his one-time wish as Congress faces, yet again, a deadline to fund the government. Democrats have put on the table a list of demands in exchange for their support: protecting young people who were brought into the country illegally as children, funding disaster relief, funding a program for poor children’s health coverage and offering treatment for opioid addicts.

Trump seems determined to yield on none of this and instead is demanding money to build his promised wall on the U.S.-Mexican border.

If the two sides can’t come to agreement, the government will shut down on Jan. 19, the eve of the one-year anniversary of Trump’s inauguration and less than two weeks before he’s scheduled to give his first State of the Union address to Congress.

Those close to the president think he will recognize the political peril of such a dramatic move, especially if it stands to undercut his daily boasting about the economic improvement that has taken place on his watch. Others say the potential for drama appeals to him.

Either way, the clock is ticking. 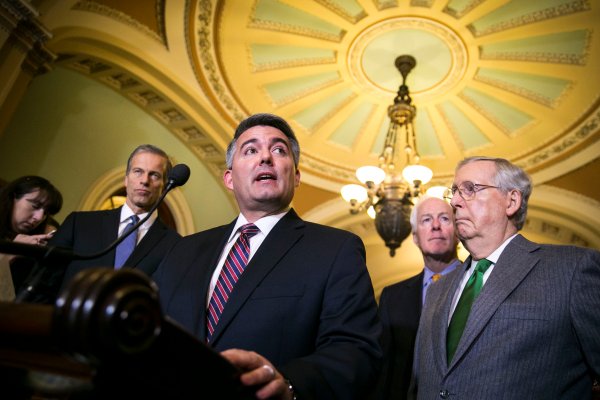 Lawmakers Are Furious Over Justice Department Decision on Marijuana Enforcement
Next Up: Editor's Pick