It’s award season and in the spirit of it all, Stephen Colbert has a little something for President Trump’s consideration.

“Sunday is the Golden Globes — I’m not nominated, don’t watch — but on Monday there’s an awards show everyone’s going to be glued to,” Colbert said on Wednesday night’s episode of The Late Show. He was referring to the “Dishonest & Corrupt Media Awards,” which the President announced via his personal Twitter account on Tuesday.

“Personally, I’m excited for your Dishonest & Corrupt Media Awards,” Colbert said, speaking to the President directly. “Or, as we call them in the business, the Fakies.” Because Colbert likes an award as much as anyone in Hollywood, he launched a campaign to ensure that he doesn’t get snubbed at Trump’s media award show. Colbert purchased a billboard in Times Square in New York City that he hopes will catch the president’s eye. “I’m hoping to be nominated in all categories,” Colbert said, noting his skills at “fakest dishonesty”, “least Breitbarty,” and, of course, “smallest button.” 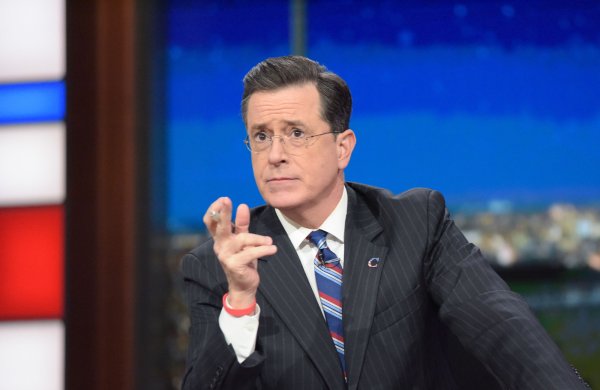 Stephen Colbert Went Right Back to Work on Trump's Tweets About Kim Jong Un
Next Up: Editor's Pick