The Senate officially welcomed two new Democrats Wednesday, reducing the Republican majority to 51-49 and bringing the number of women to an all-time high of 22.

Jones takes the state previously held by Attorney General Jeff Sessions. Smith was appointed to replace Democratic Sen. Al Franken, who resigned amid reports that he had forcibly kissed and groped several women.

Jones went against tradition and was escorted by former Vice President Joe Biden, who campaigned for him during the contentious special election, as opposed to the senior senator for his state, Republican Sen. Richard Shelby. Biden was all smiles as Pence delivered the oath of office and offered Jones a bear hug after the “I do.”

Smith was escorted Sen. Amy Klobuchar, a fellow Minnesota Democrat, and former Vice President Walter Mondale, who served under President Jimmy Carter. Mondale has been a mentor to Smith; in 2015, Smith told MinnPost that the former Vice President advised her to take a more hands on approach to her position as Minnesota’s lieutenant governor.

“How’s looking at him,” Biden said as he joined the Jones family for a photo with the Vice President. In response to a shouted welcome, Biden responded: “It’s good to be back.”

The group chatted about football before they were replaced by Smith and her family, who she introduced to the Vice President one-by-one before the swearing-in. Sen. Klobuchar and Mondale beamed behind Vice President Pence as he administered the oath for the second time that day and her family applauded after the second “I do.” As the large group reshuffled for another photo, bookended by both VPs, Mondale, a Democrat, joked that he’d “hold up the left side” of the photo while Pence said he’d take the right.

It was a lighthearted way to kick off this session of the 115th Congress and a nice reminder that though Senators may not always agree, many of them are friends. But the jovial spirit that defined the morning likely will not last. Congress is gearing up for a bitter spending fight with a looming Jan. 19 deadline; Democrats have already begun to list their demands. Today, not unlike the mock-ceremony, was mostly just a show. 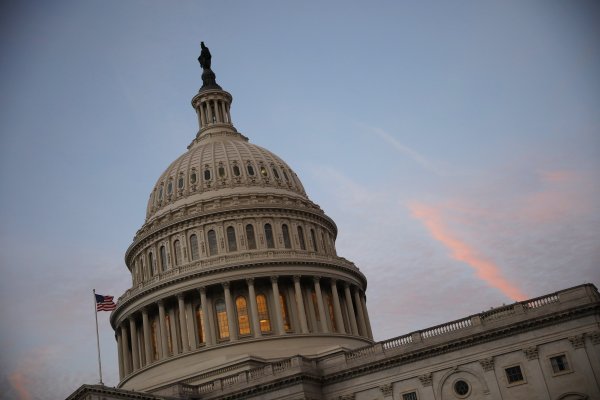 Congress Enters A New Year With The Same Old Problems
Next Up: Editor's Pick