We’re only a few days into the new year, and two contradictory developments have occurred with regard to North Korea: Kim Jong Un indicated a willingness to meet with South Korea for the first time in nearly three years, and President Trump threatened the use of force once again. As North Korea demonstrates increasing potential to hit the U.S. mainland with nuclear weapons, this has been one of the main U.S. responses — to threaten military force to coerce Kim’s submission to the denuclearization agenda. But it is not the best course of action.

We acknowledge that war is an option. Yet both of us served on active duty together in the Air Force in Guam, and while our opinions are our own and do not reflect the official policy of the U.S. government, it is clear the U.S. has exactly zero good military options against North Korea. A war with North Korea would be incredibly painful, likely leading to the deaths of millions of Koreans, perhaps hundreds of thousands of Japanese citizens and hundreds of thousands of U.S. service members and civilians.

No one wants war, and the hope is that the threat of violence will compel Kim to give up his weapons. But history casts that hope into serious doubt. While credible military threats can help deter a state’s behavior — no nation has ever attacked a NATO member, for instance — there is little evidence that military threats can compel a regime to give up its own tools of deterrence. If anything, the case of Libya, wherein its authoritarian ruler gave up weapons of mass destruction in exchange for sanctions relief only to be ousted by NATO forces years later, likely strengthens Kim’s resolve to solidify his nuclear deterrent.

Threatening the use of force only increases the risk of miscalculation, most notably the risk that the North Koreans believe that an attack is either imminent or inevitable, almost certainly incentivizing them to attack first. As they first stated to the U.S. negotiating team during the 1994 nuclear crisis, they learned a lesson from the U.S. treatment of Iraq, and they will not sit back and let the U.S. build up its forces.

Frustrating as this is, the same historical record that offers little hope for short-term denuclearization does offer hope for a more stable relationship with North Korea in the long-run, eventually leading to the possibility of denuclearization some years in the future. We have witnessed the nuclearization of dangerously hostile powers before. Joseph Stalin’s Soviet Union is one example. But Mao Zedong’s People’s Republic of China is more instructive.

Kim’s North Korea and Mao’s China share many characteristics. The PRC nuclearized in 1964, at a time when Mao’s government faced a hostile international environment. Like the Kim regime, Mao’s China was brutal and bloody. The Korean War saw the death of over 1 million Chinese soldiers, including Mao’s son. The Great Leap Forward in 1954–‘56 killed an estimated 45 million, while later in the 1950s Mao famously said that China could fight the Capitalists and lose 300 million and still have 300 million to spare. The bloodshed of the 1950s gave way to the Cultural Revolution, claiming 25 million more lives. In 1969, Mao initiated a border war with the USSR that resulted in mass mobilization of Soviet forces — nuclear and non-nuclear — on China’s borders. Nuclear weapons had not stabilized China’s external relations, and military pressure did not deter Mao’s embattled authoritarian regime.

Nonetheless, China did eventually normalize its relationships with all of its neighbors and stabilize internally. This wasn’t achieved by continued isolation and threats of military force by the U.S., but the opposite. In 1971, President Nixon initiated a bold diplomatic initiative that culminated in the recognition of Beijing as the legitimate regime of China in 1974, after which tensions between China and the international community improved dramatically.

We can follow this template with North Korea. Kim is a horrific dictator, but our intelligence agencies do not assess that he is suicidal. We have deterred such regimes before over the past 70 years, Mao being only one. While the world should not recognize North Korea as a legitimate nuclear power the least bad of our limited options today is ending futile efforts at forced denuclearization, with its concordant risk of a devastating war. Instead, we should work toward creating the conditions for eventual denuclearization over the mid- to long-term.

Pariah states will want to cling to nuclear weapons, but the example of China shows relations can be stabilized and deterrence can work. Post-apartheid South Africa also demonstrates nuclearization need not be irreversible. That nation voluntarily ended its nuclear weapons program in 1989, concurrently with apartheid, with the chief aim of normalizing relations with the world — and only after its perceived security threats had been addressed. The lesson is clear: for paranoid isolated regimes, the art of the deal comes down to the carrot, not the stick.

Certainly there are differences between North Korea and China and South Africa. However, past historical experience shows that the current strategy based on threatening North Korea will likely fail. It is time to chart a new course. 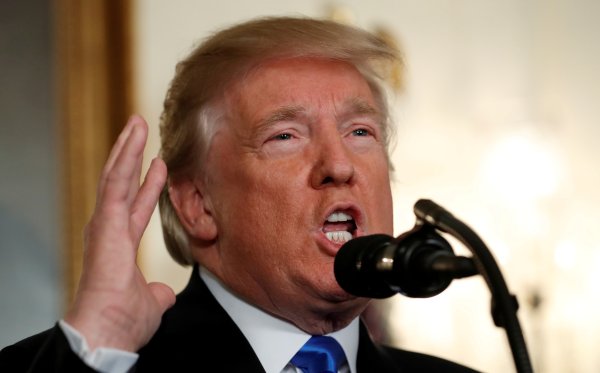 'I Too Have a Nuclear Button'
Next Up: Editor's Pick