You may be familiar with the Justin Timberlake of *NSYNC years — all bleached curls and boy band harmonies — or the JT of his SexyBack reinvention,“Suit and Tie” incarnation, or family-friendly “Can’t Stop the Feeling” dad pop. But 2018 ushers in a new era for Timberlake: now, we will know him as a Man of the Woods. That’s the title of his upcoming album, out Feb. 2, which will be followed two days later by his big Super Bowl halftime performance.

In a new trailer for the album, his first since 2013, Timberlake goes back to his roots — literally. “This album is really inspired by my son, my wife, my family, but more so than any other album I’ve ever written, where I’m from. And it’s personal,” he voices over some atmospheric chords and footage of him brooding in frosty cornfields and half-submerged in a glassy river. (Timberlake hails from Memphis.)

“It feels like mountains, trees, campfires,” a female voice also intones, before we get a snippet of a more upbeat tune. “I feel like it’s so earthy,” Timberlake notes. “It’s just where you’re at in your life right now,” adds another contributor, none other than Pharrell Williams. (Williams is also quoted calling a song “a smash,” giving at least one part of Timberlake’s project his official stamp of approval.)

While this version of Timberlake may be a surprise to those accustomed to his cosmopolitan vibe of years past, he’s been laying the groundwork for a rustic Americana identity for a while now: just look to his William Rast clothing line of old-school denim and leather for an early hint.

The first song off of Man of the Woods will drop Friday. 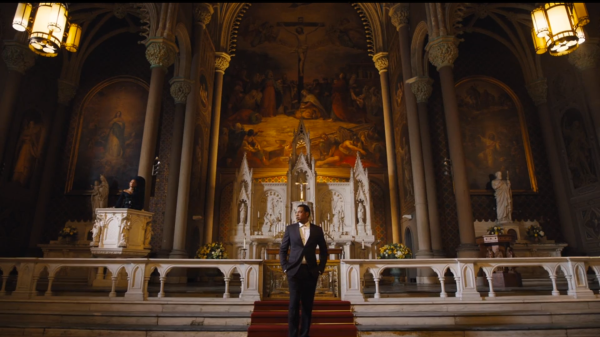