The Boss: Lorraine Egan Ditched a Law Career to Help Find a Cure for Cancer

Louis Pasteur once said: “Chance favors the prepared mind.” If you’ve done your homework, you”ll see opportunities that others might miss. In science, this leads to innovation and breakthroughs. In careers, it leads you down unexpected and deeply fulfilling paths.

This has been true in my own career. Seizing opportunities and taking risks has led me from being a lawyer to becoming President of the Damon Runyon Cancer Research Foundation, a leading nonprofit focused on supporting breakthrough cancer research.

I came from a family where everyone chose “professional” careers. Law seemed like the obvious choice for me, having majored in English and Political Science.

After attending law school at the University of Chicago, I followed the traditional path of joining a large law firm and quickly realized that I wasn’t passionate about the work I was doing. So I started exploring other paths. I was constantly talking to people about what they did, trying to figure out what interested me the most. I was very up front with my bosses about my interest in trying something different, which was pretty limiting for my law firm career. But I just knew in my heart that I should be doing something else.

Because of a strong interest in health care, my first move was into the General Counsel’s Office at Mount Sinai in New York City. Then I was given the opportunity to transition into senior administration, serving as the chief of staff for Mount Sinai’s CEO. It was completely out of the realm of what I had done before, so it could have been such a disaster, but I jumped at the opportunity. It was a fantastic job, focused on important issues in clinical care, biomedical research and training future medical and scientific leaders.

After several years, I started thinking about my next challenge and began networking again. That’s when chance truly favored me. I had a serendipitous conversation with a colleague about my aspirations, and she told me about the opportunity to lead the Damon Runyon Cancer Research Foundation.

Once I learned about Damon Runyon’s unique mission of finding and funding the most promising and innovative young scientists in cancer research, as well as its track record of supporting future Nobel Laureates and tremendous impact on cancer, I knew this was the perfect next step for me. Damon Runyon needed someone who could raise significant funds to support its mission, and I had never been a fundraiser. But the job sounded intriguing and challenging, and most importantly, it was focused on such an important cause. So I just said, “I can do that.” That was 17 years ago.

I go to work every day knowing that I am helping brilliant scientists make the next breakthroughs against cancer. This is incredibly important since federal funding for scientific research has flatlined in recent years, and it’s incredibly difficult for new scientists to secure the funding they need. The Damon Runyon Cancer Research Foundation is basically a recruiting and venture capital firm for cancer research. We identify the best new scientific talent in the country and give them funding to take risks on new ideas. We encourage them to be disruptive and find entirely new approaches and treatments for cancer.

The people we champion will help prevent and cure all types of cancer one day. That’s something that’s very easy easy to be passionate about.

Lorraine Egan is the president and chief executive officer of the Damon Runyon Cancer Research Foundation. 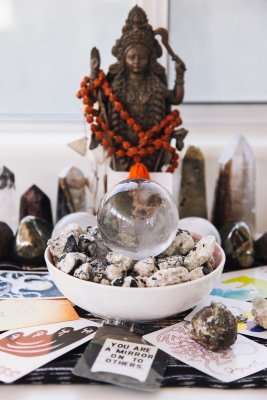 How Crystals Can Help Improve Your Life — If You Believe
Next Up: Editor's Pick