A group of New Year’s celebrants in New Zealand employed some creative thinking — and a little heavy lifting — to evade a drinking ban on public holidays.

Merrymakers in the town of Tairua on New Zealand’s Coromandel peninsula built a sandbar — topped with a picnic table and an icebox full of illicit refreshments — in the middle of the estuary to ring in the New Year, the New Zealand Herald reports. The group reportedly claimed they were “in international waters” and not subject to a municipal drinking ban.

“We thought it would be a good laugh and the drinking ban would be a grey area if we were on our own island,” organizer Leon Hayward tells TIME. He and five friends, including three visiting Americans, built the platform using a combination of black sand and sea shells. Hayward said it took six hours to complete, and was finished off with wooden planks to help distribute the drinkers’ weight.

“Everybody was quite entertained by it; it wasn’t hurting anybody. They were trying to claim it was in international waters but, of course, it isn’t,” Goudie told TIME. “They had this creation, that’s what we like to see – a bit of creative and innovative activity over the summer period.”

Public drinking has been banned in Coromandel on public holidays and between between Dec. 23 and Jan. 6, since 2003, with violators facing a possible fine of $180 or arrest, the BBC reports. Recent years have seen a rash of arrests and of violent episodes at the seaside community, a popular holiday destination. This year the town of Whangamata held an alcohol-free beach party.

It seems unlikely that Tairua’s rogue revelers will face legal consequences. Waikato eastern area commander Inspector John Kelly said the impromptu island was a show of creative thinking. According to Stuff New Zealand, had the official known about the plan he “probably would have joined them.” 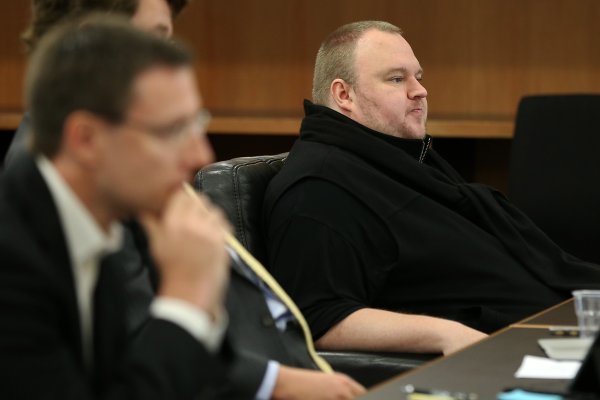 Judge Dismisses Almost All of Kim Dotcom's Extradition Appeals
Next Up: Editor's Pick