What Happens to Big-League Books When Scandal Knocks

This time last year, Milo Yiannopoulos had a reported six-figure book deal to air out his controversial far-right views. And then, very publicly, he didn’t. In February, Simon & Schuster canceled Dangerous after Yiannopoulos’ more inflammatory comments—including one in which he appeared to defend pedophilia—pushed over the edge a public that had already been agitating. Ten months later, he has sued his publisher— and found himself surrounded by new pariahs. .

Yiannopoulos is part of a trend of writers being scrapped by their publishers over matters of personal accountability. In October, Hachette announced that it would discontinue its Weinstein Books imprint, absorbing the titles published by disgraced producer Harvey Weinstein into another imprint. The same month, Penguin Random House canceled Mark Halperin’s book about the 2016 election after allegations of sexual harassment against Halperin emerged (co-author John Heilemann was collateral damage, but he has said his future plans with the interview material for the book are “TBD”). Readers continue to wonder what Bill O’Reilly’s future will be with the Macmillan imprint Henry Holt, even as the accused predator continues to dominate the New York Times best-seller list. Fox News has ousted the host and he has reportedly paid out tens of millions of dollars in settlements to women who say he sexually harassed them (he denies wrongdoing). But his publisher has not responded to recent requests for comment on their future with him.

In the past, allegations of plagiarism and dishonesty were the more likely causes for a book to be yanked. In 2006, Little, Brown and Co. withdrew a Harvard student’s young-adult novel over accusations that she had borrowed from other writers’ books. In 2014, a Simon & Schuster imprint canceled a book by a satirist who had presented himself on Twitter as an employee of Goldman Sachs, but wasn’t. (The book, Straight to Hell, eventually found a home with another publisher.) Paula Deen presaged the new norm in 2013, when she had a cookbook pulled after reports surfaced that she admitted in a deposition to having used racist language.

These days, not only do authors’ offenses echo endlessly on social media, the voices of consumers are amplified too. “Social media makes it so easy to complain about things,” says Publishers Weekly editorial director Jim Milliot, and with so many authors and readers engaging on platforms like Twitter, tension can escalate and petitions to get books canceled can circulate quickly. Although readers began protesting the minute the Yiannopoulos deal was announced, things reached a fever pitch when author Roxane Gay pulled her book from Simon & Schuster in protest. An advice guide, it was titled How to Be Heard. Within weeks, the comments relating to pedophilia surfaced, and that was that. (Yiannopoulos later said he regretted his perceived flippancy, and that he is “implacably opposed to the normalization of pedophilia.”)

Yiannopoulos’ fans and certain free-speech advocates saw the loss of the book deal as a kind of censorship—but publishers are under no obligation to publish books they fear can backfire. The First Amendment says you can write what you want—not that someone must pay you for it. Nevertheless, once a contract is entered into, it can be costly to exit: Yiannopoulos is suing Simon & Schuster for breach of contract, seeking $10 million. The publisher says in legal documents that because he never returned the first $80,000 delivered to him as part of a $255,000 advance (according to court documents), he effectively expressed satisfaction and released the company from its obligation. Yiannopoulos’ lawyer wrote in the lawsuit that “The statement that Yiannopoulos could retain the $80,000 was a transparent attempt to placate him so that he would not file the instant lawsuit.”

In July, Yiannopoulos doubled down on his avid fan base, which was only drawn in by the scandal, and self-published his book. His following was surely part of why Simon & Schuster wanted to publish him in the first place, even though the lawsuit reveals comments from an editor who seemed to find problems with some of his views. Among Mitchell Ivers’ exhortations: “Throughout the book, your best points seem to be lost in a sea of self-aggrandizement and scattershot thinking,” and “Unclear, unfunny, delete.” Yiannopoulos says Ivers was at other times more encouraging. (Ivers did not respond to request for comment.) “Dangerous was a New York Times best seller. Across all platforms and formats, we are closing in on 200,000 copies sold,” Yiannopoulos told TIME through a spokesperson. (Publishers Weekly said the book sold 75,000 print copies.) “No amount of jealous bitching from liberals is going to change that fact.”

The things that made readers protest Yiannopoulos—his bombastic statements—were entirely entwined with his manuscript. More often, a canceled author’s alleged transgression has nothing to do with his book. For instance, Halperin’s work (insider political reporting) is unrelated to his scandal (accusations of sexual harassment). The same is true of Deen and O’Reilly, whose subjects (cooking and history, respectively) are separate from the bad news they wrought. “If it’s the subject that’s causing controversy, I think it’s more likely that [the book will] be picked up, but if it’s something an author did,” a manuscript is less likely to find a new home, Milliot says.

Another reason publishers pull the plug pre-publication is that they know how books can suffer when scandal blossoms after the book is on shelves. In early November, former Mad Men writer Kater Gordon alleged that the show’s creator, Matthew Weiner, had sexually harassed her. (He denies the claims.) The week the news hit, Weiner had published a novel called Heather, the Totality, and was on a national book tour. He ended up canceling multiple events, and the novel had sold only 4,600 print copies as of late December, according to NPD Bookscan.

“I think that the Trump presidency has changed the tone of a lot of arguments in America now, and I think what was acceptable before in this context isn’t anymore,” says Maris Kreizman, a writer who has worked for 17 years in a range of positions in the publishing industry. “When I was an editor, it was widely understood that, for example, Dr. Phil allowed me to buy literary fiction. I think for a long time it was just common knowledge—largely said, even—that we do these kinds of books in order to pay for the good stuff.” Up until now, publishers have been comfortable toeing a certain line—Yiannopoulos’ offensive tirades were on the record before his deal went through, and O’Reilly had publicly settled a sexual-harassment case in 2004. But as the line moves and hardens, the calculation is morphing in favor of caution. “Publishers are not against courting controversy; controversy can sell,” Milliot says. “But it has to be a controversy rooted in ideas and subjects more than what the author did.” That means things can work out in the realm of indie presses or self-publishing for someone like Yiannopoulos, with his ravenous fringe following, but not so much for someone like Halperin, whose appeal depends upon his integrity. On all points of the political spectrum, the legacy of social media means that our nation’s storytellers will no longer be guaranteed a platform if they don’t conform to agreed-upon values.

But where there’s a truly enormous amount of money to be made, publishers seem to find it difficult- to say no. Which brings us back to O’Reilly. To many in the publishing industry, his books fall in the category Kreizman describes: profitable and necessary, even if his public persona had already been unpalatable to some liberal editors. His latest, Killing England, covers the American Revolution from multiple perspectives. His entire Killing series (Killing Kennedy, Killing Reagan and others, co-authored with Martin Dugard) has sold more than 17 million copies. O’Reilly’s literary agency, William Morris Entertainment, said in October that it would not represent him in future deals, though it has a “fiduciary responsibility to service the existing deals we have under contract.” His publisher, Holt, did not respond to requests for comment about its future with O’Reilly, who reportedly still has at least one more Killing book under contract. Holt president and publisher Stephen Rubin publicly commented on O’Reilly in May, a month after a New York Times report on the allegations came out, telling the Associated Press that the imprint was “totally committed to Bill, long-term … We have created the most successful adult nonfiction franchise in recent publishing history and we are thrilled to continue it.” For better or worse, it appears millions of readers agree. 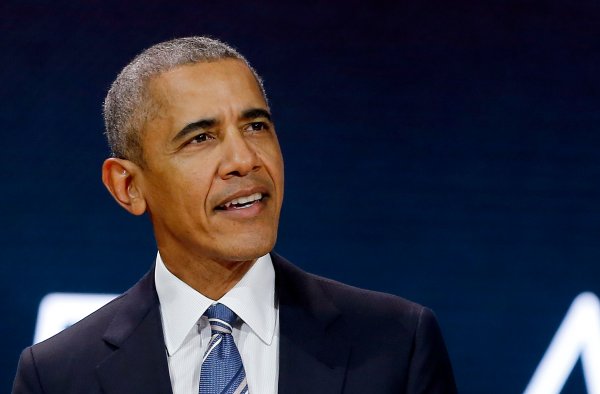 Here Are Barack Obama's Favorite Books and Music of 2017
Next Up: Editor's Pick