Myanmar Releases Journalists Imprisoned for Flying a Drone Near Parliament

Two foreign journalists and their two local staffers have been released from prison in Myanmar, two months after they were arrested for filming with a drone near parliament buildings in Naypyitaw, the country’s capital.

Singaporean Lau Hong Meng and Mok Choy Lin of Malaysia were arrested along with their local fixer Aung Naing Soe and driver Hla Tin on Oct. 27. All four were sentenced to two months in prison under Myanmar’s 1934 Aircraft Act. On Thursday, police dropped additional charges that could have seen the journalists imprisoned for years and set their release date for Jan. 5, but the four were released on Friday.

Aung Naing Soe told Reuters that their early release was as much of a surprise as the initial arrest. “We have been arrested unexpectedly, and now we are so glad to be unexpectedly released like this,” he said. “We didn’t know that we would be released in the morning until last night.”

All four had initially also faced up to three years in prison under Myanmar’s import-export law for importing the drone without authorization, while Lau Hong Meng and Mok Choy Lin also faced immigration violations that carried a penalty of up to five years.

According to their lawyer, Khin Maung Zaw, Myanmar’s authorities decided to drop the additional charges after concluding that the journalists did not pose a national security threat, as well as to maintain diplomatic relations with their ASEAN neighbors, the Associated Press reported.

The group was working for Turkish state broadcaster TRT, which denied that the journalists had violated Myanmar’s laws.

The arrests in late October followed weeks of rising diplomatic tensions over violence targeting the country’s Muslim Rohingya minority. In early September, Turkish President Tayyip Erdogan said military operations that have displaced more than 655,000 Rohingya into Bangladesh constituted “genocide”. In August, Turkey’s deputy Prime Minister Mehmet Simsek drew condemnation in Myanmar and accusations of spreading misinformation over a tweet urging international attention over the plight of the Rohingya that included four photos later shown to be from other conflicts or disasters.

Meanwhile, two local Reuters journalists who were also arrested in Myanmar earlier this month saw their custody extended this week, as Myanmar’s authorities continue to probe whether they violated the country’s archaic Official Secrets Act. Wa Lone and Kyaw Soe Oo were arrested on Dec. 12 and are being investigated for alleged possession of confidential government documents, believed to be related to military operations in Rakhine state. If convicted, they face up to 14 years in prison.

The two were held incommunicado at an undisclosed location for two weeks before their first court appearance on Wednesday, prompting widespread criticism and demands from rights groups and media representatives that the reporters be permitted to meet with their lawyers and families.

Their detention has raised concerns of a shrinking free press in Myanmar, and prompted calls from all sectors, including Secretary of State Rex Tillerson, demanding “their immediate release.” 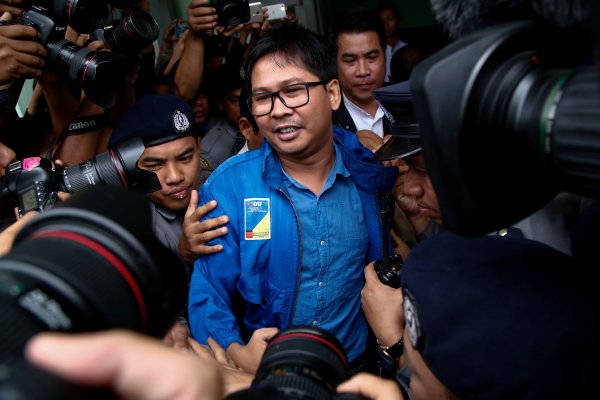