Critically ill patients have begun to be evacuated from Eastern Ghouta, according to the International Committee of the Red Cross, as fighting persists in the rebel-held suburb of the Syrian capital.

Four patients were relocated to hospitals in Damascus on Wednesday, Reuters reports, the first of 29 cases approved for medical evacuation, according to the the Syrian American Medical Society (SAMS), which compiled a list of patients in need of urgent evacuation at the end of October.

According to SAMS advocacy director Mohamad Katoub, the list includes 18 children and four women with conditions ranging from cancer, cardiac diseases, and kidney failure. He added that the evacuations were approved under a detainee exchange deal between the Syrian government and the Jaish al-Islam rebel group. The remaining 25 patients are expected to be evacuated over the next few days.

But the evacuations that commenced Wednesday “[represent] just a small fraction” of 641 urgent cases in Eastern Ghouta, where 17 patients have died in recent months, SAMS wrote in a press release. “The medical situation in East Ghouta has reached a breaking point,” SAMS said, citing dwindling food and medical supplies “coupled with ongoing bombardment.”

The U.N. has been negotiating for months with the Syrian government to obtain special “facilitation letters” that permit access to humanitarian aid workers and medical services. Special Advisor to the U.N. Special Envoy for Syria Jan Egeland said last week that 494 people are on the priority list for evacuation from Eastern Ghouta, according to Reuters.

“That number is going down, not because we are evacuating people but because they are dying,” he said.

Nearly 400,000 civilians are trapped in Eastern Ghouta, which has been under government siege for the past four years. Fighting continues to rage between rebel forces and troops loyal to Syrian President Bashar al-Assad, and last month, a World Food Programme warehouse was destroyed in the besieged enclave. The U.N. said that almost 12% of children are suffering from acute malnutrition. 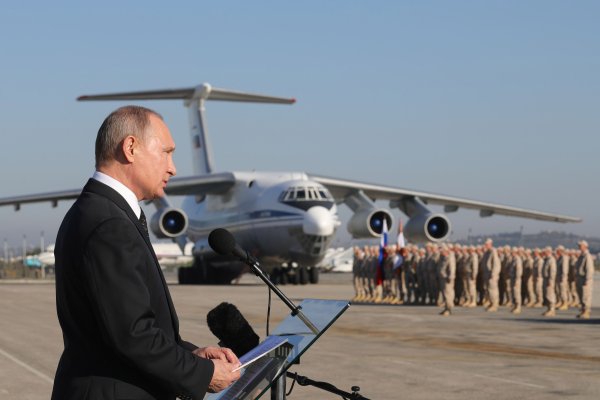 Putin Says Russian Troops Will Withdraw From Syria
Next Up: Editor's Pick