NEW YORK - JANUARY 22: A tour bus passes the Wall Street bull in the financial district January 22, 2007 in New York City. In a study commissioned by New York City Mayor Michael Bloomberg and U.S. Sen. Charles Schumer (D-NY), it was determined that New York could lose its place as the financial capital of the world in as little as 10 years. (Photo by Spencer Platt/Getty Images)
Spencer Platt—Getty Images
By Nash Jenkins

A new bill introduced by a group of Senate Democrats will grant state law enforcement officials greater authority to investigate and subpoena national banks, bringing an additional level of oversight to Wall Street that these Democrats hope could prevent future risk-related financial crises.

The Accountability for Wall Street Executives Act of 2017, as the legislation is titled, will allow state attorneys general to subpoena federally-chartered banks and interview those banks’ executives, according to a copy of the bill obtained by TIME. It would roll back a 2009 Supreme Court decision that held that the right to exercise visitorial authority over national banks belonged only to federal auditors, not to states.

The bill is being introduced by Sens. Kamala Harris and Dianne Feinstein of California, Elizabeth Warren of Massachusetts, and Richard Blumenthal of Connecticut.

“We have a duty to the American people to uncover unlawful behavior and hold violators accountable,” Harris, who served as California’s attorney general before her election to the Senate last November, said in a statement seen by TIME prior to the bill’s public release. “State law enforcement should be empowered with the tools they need to protect Americans from Wall Street abuse and fraudulent behavior by national banks. This will help ensure national banks are complying under state law and avoiding the type of illegal behavior that led to the Great Recession.”

The bill’s passage is highly unlikely in this Congress, which is controlled by Republicans. But Democratic enthusiasm for it speaks to the party’s growing earnestness to be seen as skeptical of big banks. Hillary Clinton, the Democrats’ presidential nominee in 2016, faced accusations from both outside her party and within it of being too cozy with Wall Street.

It is not the first time this year that congressional Democrats have introduced ambitious pieces of legislation that marked a leftward policy shift. In September, Sen. Bernie Sanders of Vermont, the progressive who ran against Clinton in the contentious 2016 Democratic primary, introduced the so-called “Medicare For All” bill that would move the U.S. towards a single-payer healthcare system. When he first introduced a version of this bill in 2015, he struggled to secure a single co-sponsor; this time around, one-fourth of all Senate Democrats came out in favor of it.

Harris, who is introducing the Wall Street regulation bill, was among those supporting Sanders’ bill. A progressive whose name has frequently been floated as a potential presidential candidate in 2020, Harris has faced skepticism from some on the far left who have questioned her progressive bonafides. They cite the fact that while serving as California’s attorney general, she failed to prosecute Steven Mnuchin, the current Secretary of the Treasury, when he ran the California-based OneWest Bank, which was responsible for thousands of controversial home foreclosures.

Ultimately, Harris’ powers as attorney general were limited by the Supreme Court decision that the new Wall Street regulation bill seeks to reverse. The 2009 ruling in question was the culmination of a years-long struggle between state attorneys general and national banks, ultimately ruling against the former. While serving as his state’s attorney general, former New York Governor Eliot Spitzer had attempted to ascertain if several national banks had practiced discriminatory lending practices, yielding the legal battle that led to the Supreme Court’s decision that only a federal office within the Treasury Department — not state law enforcement authorities — could subpoena national banks. The new Democratic bill would reverse that decision. 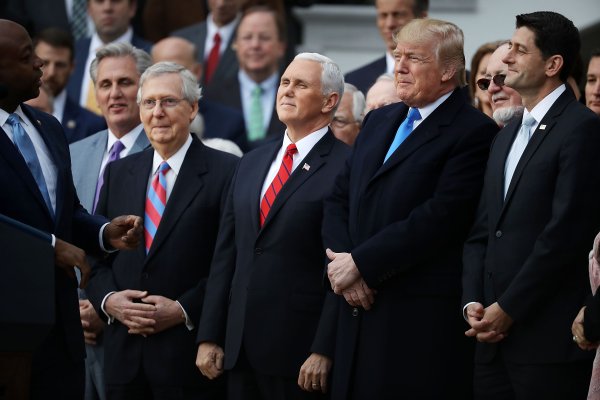 GOP Now Scrambles to Avoid a Shutdown Friday
Next Up: Editor's Pick