The Republican Tax Bill Proves That Bipartisanship Is Dead

By Nash Jenkins and Maya Rhodan

On Tuesday night in the Capitol, any residual semblance of bipartisanship — and you would have been hard-pressed to find one in recent months — wheezed its death rattle. The Republican-controlled Congress passed a largely unpopular tax reform bill along strict party lines in both the House and the Senate; not a single Democrat in either chamber voted “yes.” This, the Democrats say, was because the bill was written behind closed doors by Republicans who did not reach out across the aisle once during the drafting process. Republicans say the inverse.

“There was zero outreach from Republicans on this issue,” said Sen. Ron Wyden, the ranking member of the Senate Finance Committee, during Tuesday’s debate. “Not one moment when Republicans actually shared even a piece of paper or a document about ideas that might bring both sides together.”

Republicans control the White House and both houses of Congress for the first time since 2007, and they have capitalized on this moment by circling their wagons and driving legislation that fits their agenda: two (unsuccessful) attempts to repeal Obamacare, and now tax reform. In both cases, the Republican leadership relied on the Senate rule known as reconciliation, an arcane provision that allows the upper chamber to pass bills related to government spending with just a simple majority of 50 votes — precluding the need for any cross-aisle compromise.

“If there’s a story on bipartisanship in this Congress, it’s not that it’s died,” one senior Democratic aide tells TIME. “It’s that it never existed.”

It was not always this way. There was a time in the distant, receding past — about ten years ago — when Americans and the politicians who served them seemed to sincerely yearn for bipartisanship. Barack Obama ran his winning 2008 campaign on the promise of bridging the gap between the aisles that had widened during the George W. Bush years. But that pledge proved a pipe dream: Over the next eight years, congressional Republicans galvanized in opposition to the Obama agenda, with Senate Majority Leader Mitch McConnell notoriously declaring in 2010 that the “single most important thing” for the G.O.P. was to limit Obama’s presidency to one term.

But even though the Obama years witnessed widening partisan fault lines, but things were not yet completely Balkanized: lawmakers strayed from party lines on several high-profile votes, and there was at least a sense of serious deliberation on the matters at hand. Twenty-seven House Democrats voted against the 2010 law known as Dodd-Frank, the Obama administration’s sweeping regulatory response to that decade’s financial crisis; 34 voted against the bill that would become known as Obamacare. The Affordable Care Act spent five months under congressional consideration; the new tax bill was introduced less than seven weeks ago.

The current moment has provided few opportunities for common ground, and the Republicans’ fight for tax reform — a fight, their talking points stressed, that was three decades in the making — exemplifies it. The G.O.P. fast-tracked their bill through Congress, with House and Senate committees spending just four days each marking it up. (During the last major tax reform effort, the House alone spent 26 days undergoing the markup.) Democrats have pointed to this, and to the relative dearth of public debate over the bill, as evidence of the Republicans’ reluctance to compromise; Republicans say the Democrats are simply playing stubborn politics.

“I’ve been known for my bipartisan work my whole forty years in the Senate, and you just can’t get [these Democrats] to work with you,” Sen. Orrin Hatch, the Utah Republican who chairs the Senate Finance Committee, which oversaw the bill, told TIME outside the Senate chamber Tuesday evening.

As for what’s motivating the perceived Democratic obstruction: “It’s hatred for Trump,” Hatch says. “They lost an election they thought they were definitely going to win.”

“I think it’s a fair statement that the ‘Resistance’ does not want any cooperation with Trump on any high-profile issue, because they don’t want Trump to have a victory,” Sen. Bill Cassidy, a Louisiana Republican, who says his past attempts at a bipartisan compromise on an Obamacare fix were rebuffed by Democrats. “Their resistance to Trump is ridiculous. But some things have been bipartisan — and people said the same thing about the last Congress.”

Going into the tax debate, it was assumed that the White House would work to needle a handful of vulnerable Democratic lawmakers enough to support the measure. Democrats are up for reelection in 10 states President Donald Trump won in 2016, but some of the most at-risk lawmakers were among the loudest critics of the Republican tax plan. Sen. Joe Donnelly of Indiana, joined Trump on Air Force One for a trip to his home state to tout the president’s deal. On Tuesday, he said he’d been optimistic about the prospect of the plan earlier in the fall, but he ultimately could not agree with the provisions in the final bill. “I expected a proposal that was focused on cutting taxes for middle class families,” Donnelly said Tuesday. “Unfortunately, that is not the bill that the Majority Leader pushed through the Senate.

In September, Trump and Vice President Mike Pence hosted three Senators from states the President won in 2016 — Heidi Heitkamp of North Dakota, Joe Donnelly of Indiana, and Joe Manchin of West Virginia — at a bipartisan dinner on taxes. A month later, Sen. Claire McCaskill joined Heitkamp and Manchin at a bipartisan dinner with Ivanka and Jared Trump. But the dinners, phone calls, and trips on Air Force One did little to win them over. “I was an easy pickup,” Sen. Manchin told Politico this week. “And a couple, two, three, other Democrats would have been easy pickups if they had just made an effort.”

Democrats, on the other hand, were unanimously opposed to the cuts. On the House floor Tuesday, Democrat after Democrat shamed the bill, calling it a handout to corporations and the wealthy and a slap in the face to middle class Americans. “This GOP tax scam is simply theft,” said House Minority Leader Nancy Pelosi. “Monumental, brazen theft from the American middle class and from every person who aspires to reach it.”

The House will have to vote on the tax bill again on Wednesday because two provisions in the bill violated Senate budget rules, but Democrats’ disdain for the bill is unlikely to change when that happens.

Twelve Republicans joined with Democrats to vote against the bill. Most did so because a provision that caps the state and local tax deduction at $10,000 would disproportionately harm their constituents. One Congressman, Rep. Walter Jones (R-N.C.), voted against the Tax Cuts and Jobs Act because of the impact it is projected to have on the deficit. “I’m all for tax reform, but it must grow the economy, not the debt,” Jones said.

Democrats grew even testier as day became night. In the moments before the debate concluded and the voting began, Senate Minority Leader Chuck Schumer made his final appeal. “This is serious stuff; we believe you’re messing up America,” Schumer said. “You could pay attention for a couple minutes.”

In a dark final moment, he called on his colleagues to vote no on the bill. “Otherwise, I believe the entire Republican party and each of you will come to rue this day.”

Amid heightened police presence, protests erupted as voting began. A middle-aged woman was seen dragged up the stairs of the Senate balcony by police, but they didn’t deter her chants. “People over profit!” she pleaded as they carried her away.

Afterwards, Republicans were exuberant. “Democrats have said that the American people will remember this night,” Sen. Hatch said. “I hope they do.” 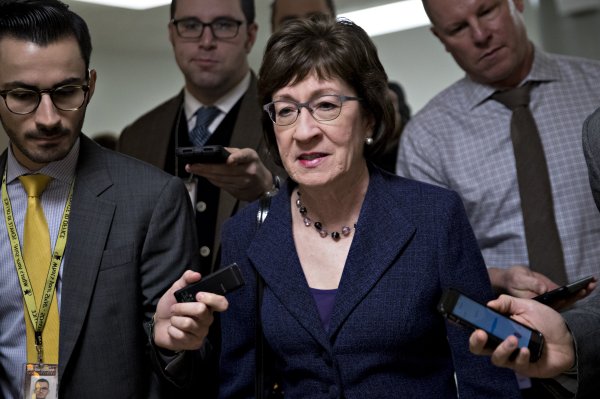