'They Didn't Change at All': The Persistence of Charlie Hebdo

Policeman stand in front of the satirical French weekly Charlie Hebdo's headquarters, on Feb. 8, 2006, in Paris.
Pierre Verdy—AFP/Getty Images
By Olivia B. Waxman

Sunday will mark three years since gunmen stormed the offices of the French satirical weekly Charlie Hebdo and opened fire, killing 12 and injuring 11. The send-ups of Islam that the magazine published had made it a target for years, especially after in 2006 it reprinted caricatures of the Prophet Mohammed that ran in a Danish paper, and in 2011, it ran an issue “guest-edited” by the Prophet.

As the anniversary of the 2015 attack approaches, one historian says it’s worth noting that the publication hadn’t been doing anything differently when it was targeted on Jan. 7, 2015.

“In a way, it’s the fact that they didn’t change at all from the ’60s to the 21st century that’s the most interesting thing about Charlie‘s history,” says historian Emile Chabal, author of France since the 1970s: History, Politics and Memory in an Age of Uncertainty. “If you follow the history of the publication, you see a deep, deep skepticism and hostility towards figures of authority who have rigid ideologies.”

When its predecessor Hara-Kiri launched in 1960 as a monthly, it appealed to French people who were born in the ’30s, too young to serve in the Second World War, and who came of age in the ’50s. At that point, “France was a rigid, hierarchical, rule-bound, conservative society with a political system that matched,” as Chabal puts it. “So the target of its ire was what they considered to be a very stultifying French way of doing things.”

The government maintained strict control over radio, TV and newspapers at the time. Even though Hara-Kiri was out there, the government could still censor publications. Not long after Hara-Kiri started coming out more frequently in 1969 — as Hara-Kiri Hebdo, meaning weekly — the French Interior Minister shut it down after its Nov. 16, 1970, issue announced the death of French President Charles de Gaulle via a cover line riff that conflated his death with a tragic nightclub fire that was also in the news at the time. It was deemed “too soon,” to use a 21st-century expression, as well as a bad influence on youthful readers and not in line with the nation’s values.

“De Gaulle was seen as an untouchable leader of France,” says Chabal, “not only because he had liberated France from Nazi occupation, but also because he solved the Algerian crisis in ’58, and made France proud of itself.”

But something important had changed between 1960 and 1970. The publication had more popular support. More young French people were thinking the way the paper’s staff did, especially after protests made news in the summer of 1968, with students demonstrating against rigid, archaic curricula and workers in factories protesting poor working conditions.

TIME described the rationale for the protests in one of several features that May on the upheaval in France:

Chabal calls the uprisings a “failed attempt at social revolution, because it didn’t change the political systems of France,” but acknowledges that it did change hearts and minds, so to speak.

This new mood encouraged the development of radical publications such as Charlie Hebdo, the new name picked for Hara-Kiri Hebdo in order to keep publishing under the ban.

Today, the change experienced in 1960s France — the clash of multiplying points of view — is only magnified. Social media has created even more opportunities for people to find others who share their perspectives. For Charlie, that means readers can find each other, but also that people who believe the magazine goes too far can communicate more easily. Chabal argues that, as France’s demographics have changed, with the country now home to a larger Muslim population than any other E.U. country, that side of the equation is gaining influence when it comes to the publication’s portrayals of Islam. Those who find Charlie Hebdo offensive are speaking out about it more than they were in the ’50s or ’60s, he says — but voicing opposition is part of Charlie Hebdo‘s history, too.

In fact, rather than shut down, or reduce its presence, the publication has expanded its presence. It recently launched an online version geared toward American readers that covers the Trump era and the resistance movement in graphic-novel form. What has changed, perhaps, is the way its irreverence is interpreted by the world, as events in 2015 and beyond lend new weight to its satire.

“This is not about laughing or making jokes,” Laurent “Riss” Sourisseau, a cartoonist for Charlie Hebdo, who was injured in the 2015 attack explained to the Washington Post in October while flanked by body guards. “This is about intellectual curiosity, about trying to figure out what happened.” 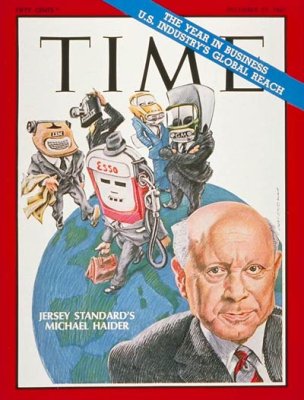