Your High Quality Caviar Might Just Be Made in China

Perched on eastern China’s Qiandao (“Thousand Island”) Lake are 300 floating steel pens, their waters churning with writhing fish. These are sturgeon, a species native to Russia and Central Asia, much sought after for its roe, which is processed into caviar.

Despite China’s well-deserved notoriety for choking pollution and woeful food safety, the world’s number two economy produces some 35% of all caviar today. And it’s not just a cheap substitute. The Kaluga Queen brand produced on Qiandao Lake—a man-made, 573 square kilometer reservoir about 200 miles southwest of Shanghai—is served in 21 of the 26 Michelin three-starred restaurants in Paris, as well as at superstar French chef Alain Ducasse’s flagship restaurant in Monaco. It was also served to world leaders at the 2016 G20 Summit in Hangzhou. Even so, the brand’s Chinese origin is conspicuously discreet on packaging—at least for now.

“Consumers are realizing that, even though our caviar is produced in China, it is the best cultivated caviar and can rival wild caviar,” says Xia Yongtao, Kaluga Queen’s deputy general manager. “That is why our product is so in demand.”

Kaluga Queen sells 60 tons of caviar per year, says the firm, making it the largest producer in the world. There are 30,000 sturgeon on Thousand Island Lake, which can grow to 200 kg over the decade it takes to reach sexual maturity. Kaluga Queen also has around 40,000 younger fry in special incubator tanks at its headquarters two hours’ drive away. With caviar starting at $150 for a small tin, and up to 15% of a mature sturgeon’s bodyweight comprised of eggs, a single fish can command a price to rival a Ferrari. They are guarded 24/7 and kept under meticulously controlled conditions.

“Of course, the very best caviar comes from wild Caspian sturgeon,” says Abbas Azari, an Iranian caviar expert with over four decades experience in the industry, who visited Kaluga Queen to inspect the production process for a client, scrutinizing trays of roe with tweezers and a practiced eye. “But Chinese caviar is very good. It has its own special qualities.”

The process of harvesting and salting roe is Iranian in origin—caviar is thought to derive its name from the Persian cahv-jar, or “cake of power”—but it was from the far shore of the Caspian Sea that caviar grew to worldwide renown. In 18th century Imperial Russia, Catherine the Great served it at lavish banquets. After the Bolshevik Revolution, Russia’s exiled aristocrats fanned out across Europe, spreading the delicacy’s popularity as they went, especially in emigre centers like Paris and London.

Following the fall of the Soviet Union in 1991, tight controls on fishing in the Caspian were lifted, and less than a decade later wild sturgeon was severely depleted. The Convention on International Trade in Endangered Species (CITES) classified the fish as endangered in 2000. Soon after, fishing wild sturgeon was banned altogether, which opened the door for commercial farms to flourish.

WHO Experts in China for Investigation of Coronavirus Origins

Kaluga Queen produces several varieties of caviar: there’s the salty, grey-green roe of Siberian Sturgeon; the light green, buttery flavored roe of the Kaluga and Amur Hybrid — the brand’s best-seller and what was served at the G20; and the olive-green Russian Sturgeon variety, a favorite of the French market, which melts into a creamy salinity. But caviar’s apogee is considered to be Beluga, with its larger, almost coal-colored spheres and subtle taste. One small box produced by Kaluga Queen costs $2,100—that works out at 60 cents per glistening egg.

Entry to the factory floor is only permitted after donning white coats, boots, hairnets and rubber gloves, plus a minute-long dunk in sterilizing baths for both hands and feet. Then comes another minute in an “air shower” to remove errant dust or hair. Inside, workers stun live fish by plunging them into ice baths before slicing their pale underbellies open lengthways. Two large deposits of eggs are plucked out and then placed on steel trays. The discarded sturgeon then vanishes along a conveyor belt to be sold as meat, mainly in Russia. A sample of each fish’s eggs is collected and documented; every tin of Kaluga Queen sold has a QR code that contains the specific production and cultivation history of the parent.

“One of the reasons for our success is our relentless pursuit of best quality control,” says Xia. “Our caviar costs 10% more than our Western counterpart, yet demand exceeds supply.”

While 80% of Kaluga Queen products are exported to the E.U., U.S. and Central Asia, there is also a growing demand for it among affluent Chinese. At Beijing’s famed Xing Yongsheng roast duck restaurant, proprietor Wang He has started pairing caviar with his signature dish. “The salty flavor of the caviar compliments the salty skin of the duck perfectly,” he says. “And as duck is from the land, and caviar from the sea, the combination together is fantastic.”

It doesn’t hurt, of course, that many Chinese prize rare and expensive foods, even ascribing health benefits to them. “It’s very good for the brain,” says Xia of his caviar. “I make sure my son eats one tin every month, as well as a tin before every exam.”

For Wang, caviar fits perfectly into a Chinese culinary culture that sets great store on bird’s nest, abalone, and—with increasingly severe environmental consequences—shark’s fin. “Chinese people always want the best stuff,” he says. “If caviar is the best of Western cuisine, they will accept it.”

Getting Western consumers to pay top dollar for fine food that says “Made in China” on it is another challenge entirely. But it’s a challenge that China’s caviar producers look likely to overcome.

—With reporting by Zhang Chi/Qiandao 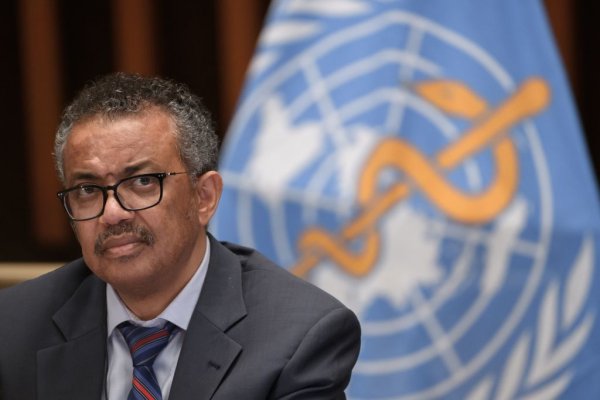 WHO Experts in China for Investigation of Coronavirus Origins
EDIT POST