Tavis Smiley said in a new interview that PBS made a “huge mistake” by suspending his show amid allegations of sexual misconduct.

PBS announced last week it was suspending distribution of Smiley’s self-titled nightly show after an investigation found that Smiley had multiple sexual relationships with subordinates and created a verbally abusive and threatening environment. PBS doesn’t employ Smiley, who owns the company that funds and produces the show. (Smiley has contributed opinion pieces for TIME.)

In an interview with Good Morning America on Monday, Smiley said that all of the relationships he had with employees were consensual — and that PBS didn’t give him a chance to fully tell his side of the story.

“I have never groped, I have never coerced, I have never exposed myself inappropriately,” Smiley said. “I celebrate and applaud these women who’ve had the courage to come out and to tell their truth and lead us in a conversation about how to create healthy workspaces… At the same time, I want to make sure that we don’t lose all sense of nuance and proportionality in this conversation. Because if we do, then people end up being guilty just by accusation.”

Smiley, who also denied the allegations that he created a hostile work environment, said he had proof that the relationships were consensual, but that PBS didn’t give him an opportunity to share that information and receive “due process.” He added that he wasn’t sure he would return to the network if it decided to reinstate his show.

In a statement to TIME, a PBS spokesperson said: “Tavis Smiley needs to get his story straight.”

“In contrast, PBS has been consistent: PBS stands by the integrity of its investigation, which has been conducted by an outside firm with expertise in such matters,” the statement said. “Mr. Smiley’s own words today coupled with the information discovered during the investigation confirms PBS’ decision to indefinitely suspend the distribution of ‘Tavis Smiley.’”

Smiley said he was going to continue to push back against the claims to protect his reputation, but admitted he had regrets about how he handled himself at times during his career.

“I recall once sitting in a conversation with a person who was interested in being a producer on our show… At the end, I said to her: ‘My lord, you’re brilliant, you’re smart, you’re gorgeous. I’d rather date you, I think, than have you work for me,'” he said. “I realized immediately what a mistake it was to make that comment. I went back immediately and apologized to her, and the situation was resolved.”

“I’ve made mistakes because I’m human, I’m not perfect,” Smiley added. “But it doesn’t rise to the level of wrongful termination.” 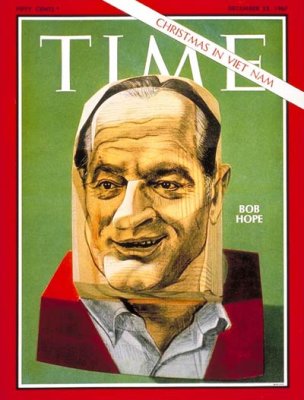 50 Years Ago This Week: Bob Hope Goes to Vietnam
Next Up: Editor's Pick