A Michigan police department has come under intense scrutiny after body camera footage showed officers handcuffing a shrieking 11-year-old girl while searching for a 40-year-old woman suspected of stabbing a relative.

Grand Rapids police chief David Rahinsky said Tuesday the officers were wrong to handle the girl in such a manner and called the video footage “disturbing.”

“Listening to the 11-year-old’s response makes my stomach turn,” he said. “It makes me physically nauseous.”

The Grand Rapids police department released body camera footage showing the girl, Honestie Hodges, coming toward the officers with her hands up. Upon reaching the officers, Hodges was told to put her right hand behind her back, while the officer took out handcuffs. At that point, Hodges began screaming, “No. No. No. No.”

The Associated Press reports that police detained Hodges and two other women. Her mother, Whitney Hodges, said the officers ordered her daughter to leave the porch with her hands up. “The whole time they are telling her to come down, I’m telling them, ‘She’s 11 years old. That’s my daughter. Don’t cuff her.'”

According to the police department, Hodges was handcuffed for two minutes, patted down to make sure there was nothing dangerous on her and held in the police cruiser for 10 minutes. The department has launched an internal investigation into the matter, and Rahinsky said that the actions by the officers show the need for changes in policing. 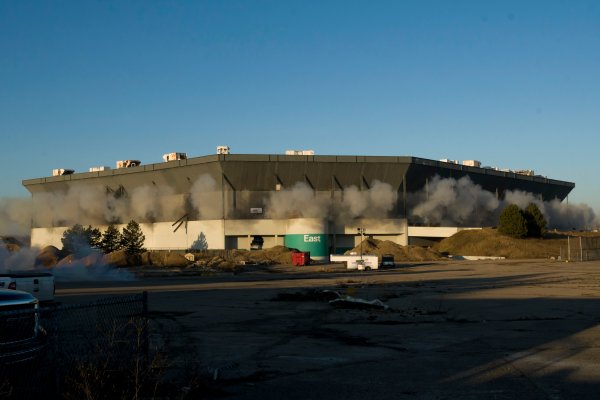 Demolition Fails to Bring Down the Pontiac Silverdome
Next Up: Editor's Pick