'My Story Is Indicative of Change.' Openly Gay Skier Gus Kenworthy Is Embracing His Role at the 2018 Winter Olympics

Gus Kenworthy was supposed to be happy. The American freestyle skier had just won a silver medal at the 2014 Winter Olympics in Sochi, Russia, and now he was being interviewed by NBC the day after—Valentine’s Day, of all days—and asked to name his Valentine’s crush. This sort of make-cute gag shouldn’t send an athlete who earns his living doing twisting flips down a mountain into a stomach-churning panic. But Kenworthy didn’t know what to say. His boyfriend? Real celebrity crushes like Zac Efron or Jake Gyllenhaal? None seemed like the best way to come out to the world.

Kenworthy settled on Miley Cyrus, which didn’t help. The NBC Olympics Twitter account broadcast his “crush” to the world. The pop star gushed on social media about a photo of Kenworthy holding four stray dogs—a rescue effort he had undertaken with the person he was afraid to identify as his boyfriend. Kenworthy soon became a celebrity heartthrob in his own right, cool enough to conquer a death-defying sport while cuddling puppies in his spare time. And it tore him up inside. “I mean, I love Miley Cyrus, she’s great,” Kenworthy says during a late-November interview with TIME. “But I just remember feeling very dishonest.”

It was a feeling he says he never wanted to have again. “It made me realize I don’t want to be in the same situation in another Olympics,” he says. In October 2015, after winning a fifth straight Association of Freeskiing Professionals overall world title, Kenworthy came out publicly in ESPN the Magazine. Now, he’s one of the first openly gay male athletes to ever compete at the Winter Games, which began Feb. 9 in PyeongChang, South Korea.

The distinction makes Kenworthy an ambassador, and the 26-year-old skier has embraced the role. He has since told his story on stages large and small, on TV before millions and over social media to questions from individual fans. His public stance has inspired others to come forward. In a 2016 article titled “I Am Gus,” a columnist for the Aspen Daily News wrote: “There is one person that bears the most responsibility for motivating me to finally do what is right: Gus Kenworthy.”

Not surprisingly for someone who found success after speaking out, Kenworthy doesn’t bite his tongue. That’s rare for Olympians, who are counseled to steer clear of politics lest they offend viewers who see the Games as an escape or the corporate sponsors on which the athletes depend. But Kenworthy says he feels an obligation to push back against President Donald Trump over moves like his attempt to bar transgender people from serving in the military. “That is just a direct attack on the LGBT community,” Kenworthy says. “It shows more courage to leave the house as a trans person than Trump has ever had to show.”

Team USA members are traditionally invited to the White House after the Olympics. Kenworthy says he won’t accept an offer from the President. “I have no interest in faking support,” Kenworthy says.

But first, Kenworthy has a much more pressing battle. He is a strong medal contender in PyeongChang, and the U.S. will be counting on him to bolster their overall medal haul. Extreme events like freeskiing and snowboarding are typically a reliable source of hardware for America’s winter athletes, particularly at an Olympics where the U.S. lacks firepower in glamour events like women’s figure skating. That Kenworthy is in this position at all shows how much the nation he represents has grown.

“I don’t think I could have ever come out as a gay athlete 30 years ago and expected to be successful in my sport,” says Kenworthy. “My story’s indicative of change.”

Kenworthy, who took to freestyle skiing as a kid in Colorado, catches air at a halfpipe competition
Tim Clayton - Corbis/Getty Images

Kenworthy grew up in the ski town of Telluride, Colo., the youngest of three boys. Instead of hitting the high-speed alpine runs, he was drawn to a mountain terrain park, where he and his buddies could hop on rails and other obstacles, like skateboarders on skis. “Even when he walked along the street, he never kept his feet off the ground,” says Kenworthy’s mother, Pip, who worked at a mountain bar. “He’d walk along a wall, a bench, a ledge: turning, flipping, spinning.”

Kenworthy was a natural, and his timing was ideal: the trick-heavy form of skiing known as freestyle was growing in popularity and becoming a larger part of mainstream competitions. But he almost gave it all up when he was 14, after watching his close friend Brooks “Hoot” Brown die in a gruesome accident. Brown slipped off a snow-grooming machine and got caught in the tracks.

Kenworthy, who was struggling with his sexuality, says he remembers wishing that they could have traded places. That way, Brown would still be alive and Kenworthy would never have to share his secret. “Then everyone would have remembered me in this amazing way, and no one would have ever had to find out that I was gay,” he says.

Kenworthy says he kept skiing in part to honor his friend. He earned a reputation for hard work and fearless- ness, always game to experiment with a new trick. He was driven in part by the secret gnawing away at him inside. “I pushed myself to compensate for this other thing that I thought was wrong with me at the time,” Kenworthy says.

It didn’t help that freeskiing culture oozed machismo. The top skiers boasted about performing after a night of partying and the women they took home. Homophobic taunts were common. Fag was a term of ridicule. Bad tricks were dismissed as “gay.” “When you hear language like that getting thrown around, it puts you in a closet even more than you were before,” Kenworthy says.

Kenworthy had been dating Robin Macdonald, a photographer and filmmaker, for years, but he kept it quiet. In public, he called Macdonald a friend. Still, some members of the small community of elite freeskiers began whispering about the relationship, and it wasn’t long before Kenworthy says the taunts rolled in. Once, when he was late for a training session, a skier Kenworthy long admired called him a “fag.” “I hated him,” he says, “and felt so awful about myself.”

As he did so many times before, Kenworthy channeled his anger and released it on the mountain. He was a key part of the U.S. men’s team that swept the slopestyle podium in Sochi, and his work to help the stray dogs living under the media center’s security checkpoint turned him into a celebrity. People put a picture of Kenworthy, holding pups, on its cover, alongside Ellen DeGeneres. And there was the Miley Cyrus fauxmance.

Inside, however, Kenworthy’s world was crumbling. He had bristled when U.S. officials recommended that Olympians avoid discussing Russia’s antigay policies, and he was still angry at himself for dodging that crush question on TV. Then, after the Olympics, his relationship with Macdonald started to splinter and they eventually broke up. (Macdonald still cares for two of the dogs; Kenworthy’s mother looks after another one, and two others died.)

After a horrendous performance at the 2015 X Games, Kenworthy melted down in his car. “I don’t want to f-cking do this anymore,” he told his agent. “I don’t want to be judged all the time.” The agent convinced him to at least finish out the season.

That night, Kenworthy went to a party in Aspen and turned down a model who had hit on him. “What are you, gay?” his friend Justin Dorey, a former pro skier, remembers asking him. “Yes,” Kenworthy replied, “I am.” Dorey was instantly supportive, and Kenworthy says it was as if a 10-ton weight had been lifted. He resolved to come out— but first he wanted to finish the season with a title. “No one can talk sh-t when you’re the best,” Kenworthy says. His mind unburdened, he won a string of events and took the season’s overall title.

He started privately revealing his sexuality to family members and more friends, and says the support was unequivocal. Kenworthy’s public coming-out story landed that October. The same day, the skier who had ridiculed him for missing training called, choked up. He apologized, insisting he never meant to hurt Kenworthy. He was the last person Kenworthy expected to hear from. Oh my God, Kenworthy thought. This is going to be a much better experience than I imagined.

The subsequent ski season was the best of Kenworthy’s career. And he says he’s noticed a change among the other guys on the mountain. “They’ll be like that’s so ga- . . . lame,” Kenworthy says. “That actually means a lot to me.”

Sponsors, meanwhile, have come calling. Visa, Procter & Gamble, United Airlines and Deloitte are among his major corporate backers. Organizations like the Human Rights Campaign have honored him. And almost daily, he says, messages pour in on Instagram. A mother told him she reconnected with her gay son; another mom named her son Gus. They say that his courage inspired them to find their own.

All of this would mean little if Kenworthy were not one of the best freestyle skiers in the world. “Since day one, he’s been the most ambitious skier I’ve ever met,” says Dorey. “It’s amazing what the combination of talent, fearlessness and big-picture thinking can do.”

In PyeongChang, Kenworthy plans to compete in both slopestyle and half-pipe skiing—and is a contender to medal in both. In Sochi, the U.S. won three gold medals in freestyle skiing. Expectations are even higher for the upcoming Games.

That ratchets up even more pressure on Kenworthy, whose face will now be on corporate billboards and whose story will be featured in NBC’s Olympics coverage. Then there’s the added weight of being a first. “He’s not necessarily able to let loose and have as much fun as he used to,” says Matt Wilkas, an actor and Kenworthy’s current boyfriend. “He’s moodier. He grinds his teeth at night. I can wake up and hear it. I have to nudge him.”

Kenworthy’s father Peter, a community television executive, worries that there are too many demands on his son’s time. “It’s not just about appearances in front of the camera,” says Peter. “I want him to cultivate the depths of his soul as well.”

Kenworthy insists he has a handle on it all. And while he knows these Games will be far different than the last, he relishes his pioneering opportunity in PyeongChang.

“The thought of being the first openly gay male ever to compete in the Winter Olympics—I totally embrace that,” says Kenworthy. “I so badly want to inspire that community and do well for them. It’s f-cking cool.” 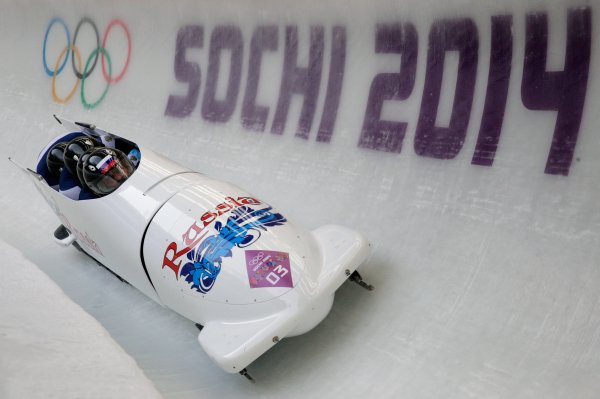 What to Know About Russia's 2018 Winter Olympics Ban
Next Up: Editor's Pick