The women, one of whom wished to remain anonymous, spoke to Variety about their alleged encounters with the two-time Oscar winner, which ranged from sexual harassment to assault.

Hoffman did not comment on the allegations, according to Variety, although his lawyer called them “defamatory falsehoods.”

A rep for Hoffman did not immediately respond to PEOPLE’s request for comment.

Cori Thomas, friend of Hoffman’s daughter Karina, tells the outlet that Hoffman exposed himself to her when she was in high school. Thomas, now a playwright, claims the alleged incident took place in 1980 in New York City when she was 16.

“He was standing there naked,” she tells Variety. “I think I almost collapsed, actually. It was the first time I had ever seen a naked man. I was mortified. I didn’t know what to do. And he milked it. He milked the fact that he was naked. He stood there. He took his time.”

Hoffman eventually put a robe on, according to Thomas, who says the actor then asked her to massage his feet. “I didn’t know that I could say no, so I did it,” she says. “And he kept telling me, ‘I’m naked. Do you want to see?’ ”

Thomas says she was “saved” when her mother arrived to pick her up, although she did not tell her what had happened until recently. She also says she never told Hoffman’s daughter, who was later a bridesmaid in her wedding. “I didn’t want to embarrass her,” Thomas explains.

Melissa Kester had recently graduated college when she says Hoffman sexually assaulted her while recording a song for his film Ishtar. Kester was invited to the recording by her boyfriend, who was working on music for the film. An aspiring writer, Kester says she bonded with Hoffman over their love of theater. When he asked for her phone number, Kester says she gave it to him.

When they met again at the recording studio, Kester says, Hoffman was struggling to record a song and jokingly asked her to stand next to him in the booth, which had a chest-level partition that blocked the lower halves of their bodies from view. “I’m standing there, and it’s kind of a small room, and he grabs me, so we’re both facing out so we’re both facing the people in the studio,” she explains. “I’m thinking that it’s kind of flirtatious and funny, like he’s holding onto me, because I’m going to help him sing better. I felt awkward. It’s a little weird. He’s hugging me while he’s singing. But ha ha ha, it’s all a joke. My boyfriend is right there.”

Kester says the ordeal continued for 15-20 seconds until the take was finished. She also says she made an effort not to react to what Hoffman was doing so as not to alert her boyfriend or the other men in the studio. After the take ended, she says Hoffman “kind of laughed.” She adds, “Then I just ran out of there, and I sat in the bathroom crying. I thought, ‘Oh my God.’ I felt like I’d been raped. There was no warning. I didn’t know he would do that.”

Kester never told her boyfriend what happened, but says Hoffman called her repeatedly after the alleged incident.

A third woman, who wished to remain anonymous, also claims Hoffman assaulted her on the set of Ishtar. She claims Hoffman “stuck his fingers right up inside of me” while she was sitting with him in the back of a crowded station wagon. She also claims later that night she went to Hoffman’s hotel room and had sex with the actor. She says the alleged incident in the car was not consensual, but when asked whether hotel encounter was, she told Variety, “I don’t know.”

Earlier this year, three women came forward with sexual misconduct allegations against Hoffman. Anna Graham Hunter told The Hollywood Reporter that Hoffman harassed and assaulted her on the set of Death of a Salesman when she was 17. Television producer Wendy Riss Gatsiounis told Variety that Hoffman propositioned her for sex during a pitch meeting and actress Kathryn Rossetter wrote in The Hollywood Reporter that the actor groped and assaulted her on Death of a Salesman.

In response to Hunter’s claims, Hoffman told The Hollywood Reporter, “I have the utmost respect for women and feel terrible that anything I might have done could have put her in an uncomfortable situation. I am sorry. It is not reflective of who I am.”

According to Variety, a spokesperson for Hoffman declined to comment on Riss Gatsiounis’s accusations. Screenwriter Murray Schisgal, who was allegedly present at the time of the incidents, told Variety in a statement, “Dustin Hoffman and I took many meetings with writers and playwrights over many years. I have no recollection of this meeting or of any of the behavior or actions described.”

Hoffman’s representatives declined to comment on Rossetter’s claims to THR, but his attorneys did reportedly put the outlet in touch with several other people who worked on Death of a Salesman who cast doubt on her claims. They included Hoffman’s brother-in-law Lee Gottsegen, actresses Anne McIntosh, Debra Mooney and Linda Hogan, actors Michael Quinlan and Andrew Bloch and production stage manager Tom Kelly, according to THR. “It just doesn’t ring true,” Kelly told the outlet. “Given my position, it’s insulting to say this kind of activity would go on to the extent of sexual violation.” 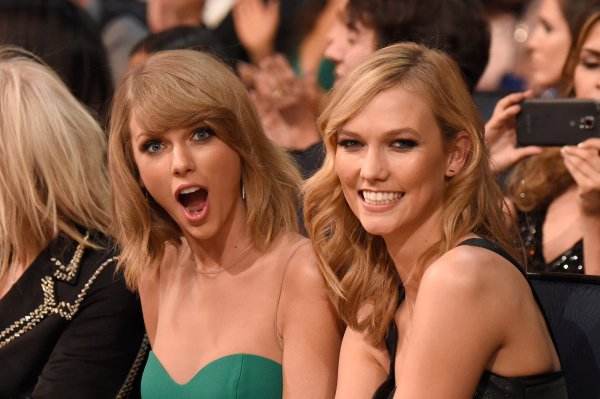 Karlie Kloss Is a Firmly Established Taylor Swift Squad Member and This Is Proof
Next Up: Editor's Pick