A bipartisan group of lawmakers is calling for hearings in response to an open letter on workplace sexual harassment that was signed by 223 women in the U.S. national security community.

The lawmakers say Congress owes it the women of the national security community to examine the issue of sexual harassment and assault in their workplace.

“If Congress does nothing, we send a dangerous message that we are indifferent to the inexcusable challenges women in the national security workforce endure,” the letter, which 42 members of Congress signed, reads.

On Nov. 28, the national security community’s #MeTooNatSec letter was first published. In it current and former federal officials, including diplomats and military service members, said that they had either experienced sexual assault and harassment or knew someone who had.

The letter was published in the wake of the allegations levied against embattled Hollywood producer Harvey Weinstein. After Weinstein was accused of serial harassment, women across all sectors and backgrounds came forward en masse with their own stories of abuse at the hands of powerful men.

Beyond adding the voices of federal employees to the chorus of women coming forward with their own stories, the letter urges federal departments to review their own policies and implement changes. All of the federal departments named in the letter currently have anti-sexual harassment policies in place and most that responded to requests from TIME in November said those policies were already under review.

In response to that letter, a bipartisan group of lawmakers wants Congress to weigh in, too. Their effort is being led by Rep. Nanette Barragán of California, who serves on the House Homeland Security Committee. In an interview with TIME on Thursday, the Democrat said the national security letter reminded her of her own experience with harassment.

After volunteering with President Obama’s 2012 reelection campaign in Florida, Barragán says she came to Washington and got approached about getting a job within the administration. “What ended up happening was a number of these guys, as soon as they heard that I was not interested romantically, they would stop helping me,” she says.

A male friend she complained about the same issue to later turned around and hit on her, Barragán says. Not long after she “politely” turned him down — she says he put his hand on her lap one night in the back of a car — he insulted her. “He said, ‘Nanette, you don’t have to prostitute yourself out to me. I’m still going to help you get a job,'” she recalls. “I will never forget those words. And at that moment, I thought, is this what it takes to get help? To get in?”

She was reminded of that incident while reading the letter, which suggests that the varying levels of harassment that women face could be both pushing them out of jobs in national security and keeping them from ascending to positions of leadership when they stay in.

“If you don’t have more women at the top helping other women or you have men who use their power in this way it certainly could prevent having people, qualified women where they should be,” says Barragán, who returned to her home state, ran for city council and later Congress after being harassed in Washington.

The letter says the 42 members who signed on are “eager” to answer the women of the national security community’s call to address these issues. In it, they urge the House Armed Services, Intelligence, Homeland Security, and Foreign Affairs Committees to hold joint hearings to “examine the issues raised and identify the best policies to foster positive workplace cultures within the departments and agencies that are the backbone of our nation’s security.”

In the letter, Rep. Barragán, says the women of the national security community note that good policy is not enough—leadership should make clear what will and will not be tolerated. “If Congress holds the hearings and brings in the leadership and Congress sends the message that we’re going to hold them accountable I think that could be very positive to change the culture,” she says.

On national security issues, there tends to be bipartisan interest in protecting the homeland and the same can be true about making sure the men and women within the ranks are also protected, Barragán says.

“In this case the women need to have protection and not feel that they are constrained because of the community that they’re in or the agency that they work for,” she says.

Congress is facing its own reckoning on the issue of workplace sexual harassment. Three members have stepped down after reports that they had sexually harassed or groped women emerged, including John Conyers of Michigan, Al Franken of Minnesota, and Trent Franks of Arizona.

Rep. Blake Farenthold, who settled a $84,000 sexual harassment lawsuit that was filed by a former staffer in 2014, announced Thursday he will not seek re-election after another employee came forward alleging the Texas Republican was hostile and vulgar toward his employees.

There are efforts to reform the way Congress addresses its own sexual assault problems; last week, a House panel held a hearing on fixing a law that determines how workplace complaints are handled. At the same time, members have begun calling for investigations into President Donald Trump, who has been accused of sexual misconduct by over a dozen women. 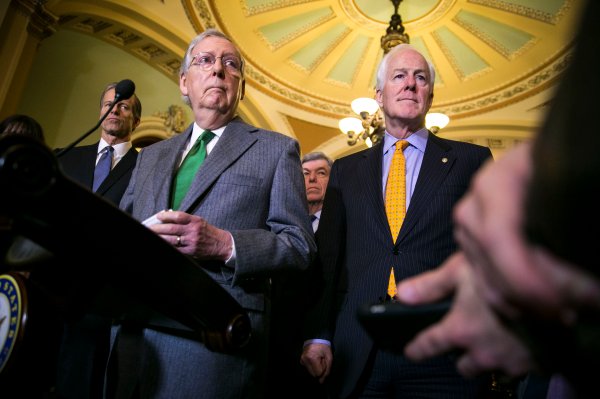 Trump Promised a 'Giant Tax Cut for Christmas.' It May Come Even Earlier
Next Up: Editor's Pick