How the #MeToo Movement Is About to Change Pro Sports

It took awhile, but the reckoning over sexual harassment and assault has finally reached the business of pro sports.

Jerry Richardson, the owner of the NFL’s Carolina Panthers, said on Sunday that he would sell the team following damning allegations about his behavior. In a searing report, Sports Illustrated found that at least four former Panthers employees have received “significant” monetary settlements due to inappropriate comments and conduct by Richardson, who is one of the most influential owners in the league. The news came days after a court filing from Jami Cantor, a former wardrobe stylist at the NFL network, that accused executives and analysts at the network, many of whom are former NFL stars, of lewd and disturbing conduct.

Is this the beginning of a long-overdue shake-up in the male-dominated boardrooms and back offices of pro sports? “They’re coming,” says Michael Kimmel, founder of the Center for The Study of Men and Masculinities at Stony Brook University, who predicts that a wave of accusations against sports figures will emerge. “One big difference in 2017 is that women are being believed. Women are not on trial. Their credibility is not the issue. Men’s behavior is the issue. That is the biggest change right now.”

Read More: Person of the Year: The Silence Breakers

If Kimmel’s right, the nation’s sports leagues would be a fat target. Men dominate the top leagues, in both locker rooms and front officers. No woman has ever been hired as a general manager or head coach in the NFL, NBA, Major League Baseball or NHL. “The more men relative to female employees, the more harassment there tends to be,” says Louise Fitzgerald, emeritus professor of gender and women’s studies at the University of Illinois and an expert on sexual harassment. “Sports is one of the most masculinized industries in the country.”

Julie Foudy played on the US women’s national soccer team from 1987-2004, and has worked at ESPN for more than a decade. She’s says she’s never been harassed, but she has heard disturbing stories from other women in the industry and she expects more women to come forward. “This is a very male dominated platform,” says Foudy. “You have these power dynamics that come into play on a daily basis.”

In her four decades as a pioneering sportswriter and sportscaster, Lesley Visser says she’s never been sexually harassed by the male bosses who helped her succeed. The players she covered, however, were a different story. They’d proposition her in the locker rooms and on the sidelines. She says she tried to deflect the incidents with humor. After a game in Green Bay a few years back, a player asked her what she was doing after the game. She told him her age—56 at the time. “He was mortified,” says Visser, author of the forthcoming book, Sometimes You Have to Cross When It Says Don’t Walk: A Memoir of Breaking Barriers. “He ran away across the field faster than Usain Bolt.”

Improper sexual conduct has persisted in sports for years. There have been countless cases of athletes accused and convicted of sexual assault, as well as horrendous examples of coaches, doctors and others sexually abusing athletes in their care. But the athletes and executives behind the teams have been relatively protected. One reason is that many employ agents, publicists and lawyers who work to suppress allegations of misbehavior.

“There’s a wall of protection thrown up around players, “says Kimmel. “When bad things happen, all kinds of people are covering for them. But these walls will soon come down.”

Foudy is hopeful that the broader movement will improve the culture in all industries, hers included. “There’s finally a feeling among women that it’s OK to talk about it,” she says. “Watching the movement, the bravery of women coming forward, it emboldens others. The whole point is that the new generations shouldn’t have to deal with this.” 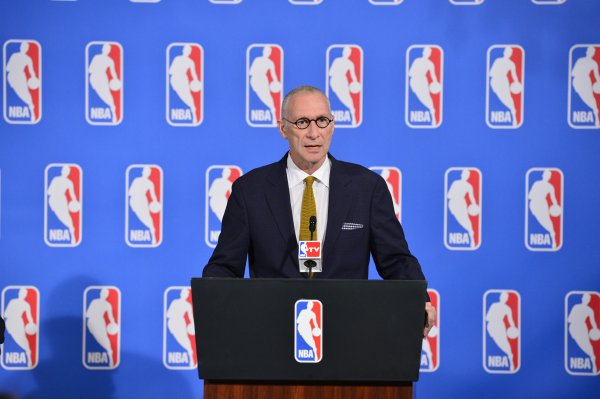 ESPN President John Skipper Resigns Due to Substance Addiction
Next Up: Editor's Pick