In a surprising interview, talk show host Stephen Colbert welcomed former basketball star Dennis Rodman to his couch to discuss his relationship with North Korean leader Kim Jong Un. Rodman, as Colbert noted, has been to North Korea five times since 2013, meeting multiple times with the young dictator during his visits, despite the fact that the U.S. and North Korea have an embattled diplomatic relationship. So how did their unlikely friendship come to be?

“I don’t know anyone in the world who would actually try to kill anyone on this planet. I don’t get that,” he added, before noting further: “I’m not protecting him. People think I just sit there and say, ‘Hey, he’s my best friend.’ No, that’s not the case. He just treats me as a friend.”

Colbert pushed back, asking what Rodman could possibly chat about with “a madman murderous dictator.” The answer? They discuss basketball.

Rodman also said he considered Kim Jong Un “more a kid than anything.” But ultimately, the two unlikely pals don’t discuss politics because that’s not Rodman’s job, in his view. “My job is to connect us with them,” he said, before gifting Colbert a very unusual personalized t-shirt.

Watch above for the full interview and Colbert’s reactions. 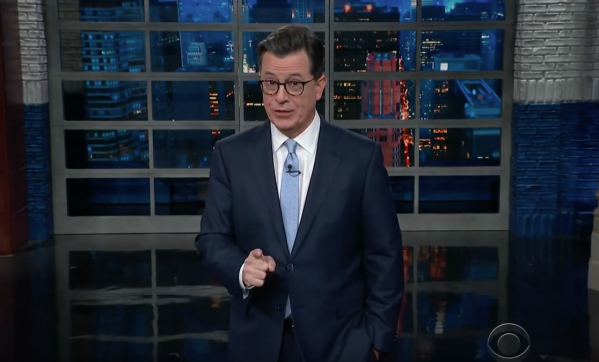 Stephen Colbert Is Livid Trump Let Omarosa Go Without Doing This One Thing
Next Up: Editor's Pick