PBS has suspended distribution of Tavis Smiley’s self-titled nightly show after an investigation uncovered “multiple, credible allegations” of sexual misconduct against him.

The investigation found that Smiley, who has contributed opinion writing to TIME and hosted his show since 2004, had sexual relationships with multiple subordinates and created a verbally abusive and threatening environment, Variety reported. PBS distributes the show, but does not employ Smiley or fund the production. Smiley did not immediately respond to a request for comment.

“Effective today, PBS has indefinitely suspended distribution of ‘Tavis Smiley,’ produced by TS Media, an independent production company,” PBS said in a statement, according to Variety. “PBS engaged an outside law firm to conduct an investigation immediately after learning of troubling allegations regarding Mr. Smiley. This investigation included interviews with witnesses as well as with Mr. Smiley. The inquiry uncovered multiple, credible allegations of conduct that is inconsistent with the values and standards of PBS, and the totality of this information led to today’s decision.”

Last month, PBS cut ties with Charlie Rose, another host of a long-running interview show, after several women accused him of sexual misconduct. Both Rose and Smiley are among dozens of men who have been accused of sexual harassment or assault in the wake of allegations against Harvey Weinstein, which fueled a reckoning about the treatment of women, particularly in the workplace.

Smiley responded to the suspension late Wednesday, telling TIME in a statement that he intends to “fight back.”

“PBS overreacted and conducted a biased and sloppy investigation, which led to a rush to judgment, and trampling on a reputation that I have spent an entire lifetime trying to establish,” he said.

“I have the utmost respect for women and celebrate the courage of those who have come forth to tell their truth,” he continued. “To be clear, I have never groped, coerced, or exposed myself inappropriately to any workplace colleague in my entire broadcast career, covering 6 networks over 30 years.”

“If having a consensual relationship with a colleague years ago is the stuff that leads to this kind of public humiliation and personal destruction, heaven help us,” he said. 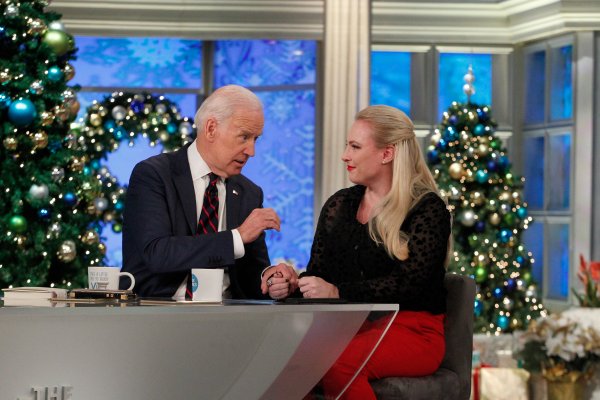 Joe Biden Comforts Meghan McCain Over Her Father's Cancer Diagnosis: 'You Have to Have Hope'
Next Up: Editor's Pick