The Boss: Elien Blue Becque Needed a New Roommate. So She Turned Her Search Into a Business

The impossible thing about going out on your own and starting a company based on nothing more than a hunch is that all practical advice suggests it’s a really bad idea. When I conceived of my roommate-matching platform, RoomZoom, I was a junior magazine editor. Not only did I know nothing about tech, but I also knew nothing about marketing, managing people, building quality software platforms or writing algorithms. I cared about people and I knew how to tell stories, and that was about it.

But I had an idea I believed in — a problem I wanted to solve. RoomZoom is a simple platform that matches people looking for a roommate in New York City based on mutual compatibility: logistical, lifestyle and otherwise. I started the platform because I lived in a four-bedroom apartment in Williamsburg, Brooklyn, and it was something I needed and something all my friends needed, too. Whether they were moving to the city for the first time, breaking up with a romantic partner or switching jobs, most of my friends lived in an apartment with a constantly revolving door. We all hated wading through spam on Craigslist, but we still used it all the time. I thought it was silly that people could find dates based on personality and compatibility with programs like OkCupid and Match, yet a similar tool for co-living situations didn’t exist. So I built it.

At first RoomZoom was a project for nights and weekends. My first investor agreed to finance building the beta version, which was ugly and didn’t work very well, but my network of colleagues and friends who needed roommates signed on to use it anyway. When our enrollment started to grow, I realized there was real potential in the business and began to consider working on RoomZoom full time.

Eventually I left my job to do just that, and now we have a beautiful platform and have shifted to become members-only, a move that has strengthened our community. Besides the successes, the process has also been fraught. If you want a long list of what not to do when building a tech company, send me an e-mail. But I’ve learned that taking your own hard knocks is the only way to truly grow, and that many of the clichés we all hear about building a business are true: “Never give up” — obviously; “Sales solve everything” — because if you have paying customers, you’re far less reliant on investors; and “Keep calm and carry on” — because freaking out about problems makes them worse. The difficult but incredibly valuable part is learning these lessons for yourself.

For all the challenges, I’ve also discovered that my gut instincts are often correct, that people are the most important element in all aspects of a company, and that empathy is the most important ingredient in a good consumer-facing tech product.

My friends have observed that one of my talents is putting the right mix of people in the same room. If you’re introducing two people, you need to identify with them well enough to understand who they would enjoy getting to know. Broadly speaking, that’s what RoomZoom does. We need to understand our users from the beginning to be able to match them with people they share something in common with and also share a price range, ideal neighborhoods, similar moving dates, ideas about pets, attitudes toward guests and preferences about sharing olive oil. Thankfully our algorithm does that automatically and at scale, and though it’s not an easy problem, every time we connect two members it’s like a little party — “Yay! They like each other!”

At some point I began realizing that as my staff and I build a community, as we make hires, choose business partners and discover who we want to work with, we’re choosing empathetic people. A cliché of the 21st century is that digital platforms distract from actual human connection, make people feel isolated and sad, and foster inauthenticity. I don’t think that has to be true. We need to remember that technology works for humans — not the other way around. Through building RoomZoom I’ve learned in every late night, every moment of doubt and every redoubling of efforts that technology solutions are limited only by our individual imaginations and collective modes of thinking — and that they can and should be held to that standard.

Elien Blue Becque is the founder and CEO of RoomZoom. 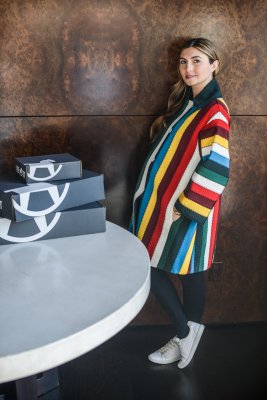 The Boss: Nasiba Adilova Turned Her Frustrations as a New Mom Into a Luxury E-Comm Startup
Next Up: Editor's Pick