Bloomberg—Bloomberg via Getty Images
Ideas
By Chris Lu
Lu served as the U.S. Deputy Secretary of Labor during the Obama Administration and is a senior fellow at the University of Virginia Miller Center.

On Tuesday, Alabama voters went to the polls after an ugly campaign dominated by allegations against Republican Roy Moore of sexual misconduct with teenagers. In the final months of the campaign, the national media spotlight was focused squarely on Moore: his proclivities, his political views and President Donald Trump’s embrace of his candidacy.

Remarkably, Democrat Doug Jones prevailed in a state that Trump won by 28 points in 2016 and that has not elected a Democrat to the Senate in a quarter century. And basking in the Alabama election results is every Democrat running for office in the 2018 midterm elections.

In all of these races, the Alabama Senate race provides a playbook for the type of campaign that can help Democrats win, even when they face opponents far less incendiary than Roy Moore. For Democrats to retake the House and Senate, they will have to drive turnout among college graduates, women, young people and minority voters, while reaching out to independents who supported Trump in 2016 but are now having regrets.

Doug Jones combined an appealing biography as a former prosecutor who battled the Ku Klux Klan and a focus on bread-and-butter issues like health care, taxes and education. (Running against a deeply flawed opponent kept the media attention on Moore’s controversial positions rather than divisive social issues like abortion.) Progressive groups across the country also funneled sizeable resources to Jones, allowing him to outspend the former Alabama judge by a 6 to 1 ratio.

It worked. According to exit polls, Jones had winning margins over Moore among independents (8 points), college graduates (11 points), women (16 points) and young voters (22 points). A massive get-out-the-vote operation also brought African-American turnout beyond the levels when Barack Obama was on the ballot.

In the weeks to come, Democratic Senators in red states like Indiana, Missouri and North Dakota will be dissecting the Jones playbook, as will be Democratic challengers in Arizona, Nevada and Tennessee. House candidates, already buoyed by grassroots enthusiasm and funding, will seek to put seats in play that were previously thought to be out of reach.

Next year’s midterm elections are already shaping up as a potential wave year for Democrats. As Washington Governor Jay Inslee explained: “This is a once-in-a-lifetime opportunity… because of the terrible price that the Trump effect will have on Republican candidates, like we saw in Virginia. When these waves break, there’s just no safe harbor.”

Even with Moore’s defeat, Democrats will seek to strengthen their already formidable position by continuing to invoke his name and positions against their opponents.

To many, Roy Moore has become a symbol of the Republican party. Just as Republican candidates have used Nancy Pelosi as their bogeyman in campaign ads, voters next year will hear Moore’s name so often that they will think he’s on the ballot. It’s no wonder that prominent Republicans like Mitt Romney, Richard Shelby and Jeff Flake tried to dissociate their party from Roy Moore, even after the Republican National Committee (RNC) provided financial support to the Moore campaign.

For Republican candidates already struggling to detach themselves from a divisive president, their party’s association with Moore will not end with his defeat on Tuesday. As one Alabama Republican on Capitol Hill put it: “Every Senate Republican up [for election] is going to get attacked with ads featuring Roy Moore in a cowboy hat waving a gun. The RNC just made it that much harder for Senators to distance themselves from him.”

Democratic attack ads will seek to tie their opponents, even those who denounced the Alabama judge, to his extreme statements: that homosexuality should be illegal; that Muslims should be barred from serving in Congress; that many of the amendments to the U.S. Constitution that expand rights should be eliminated; and that the last time America was great was during slavery.

In the aftermath of Moore’s defeat, the President tried to rationalize the outcome by tweeting that the “deck” was always “stacked” against Roy Moore. If anything, it is Trump’s full-throated endorsement of Moore that has dealt Republican candidates a losing hand across the country. 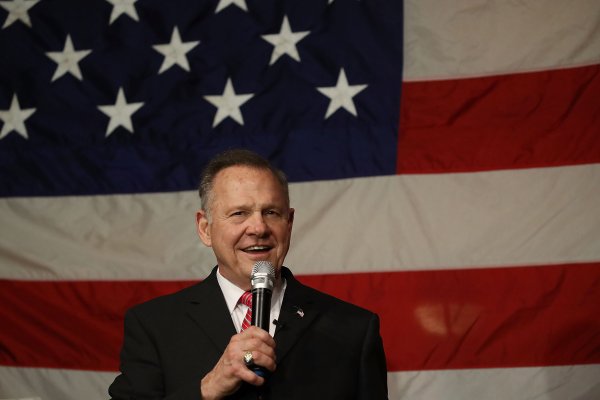 Moore Likely Still Thinks Homosexuality Should Be Illegal: Spokesman
Next Up: Editor's Pick