Tom Hanks has a lot of feelings about the proper way to decorate a Christmas tree—and so does Stephen Colbert.

When Hanks stopped by The Late Show on Tuesday night, the two stars ripped into each other more intensely than kids tearing off wrapping paper on Christmas morning. “If you don’t understand the beauty of a symmetrically designed and decorated Christmas tree, get off my show!” Hanks hollered at Colbert. While technically Hanks was a guest on The Late Show and couldn’t really kick Colbert off his own show, the point was as clear as a bell ringing out during Santa Claus is Coming To Town.

The argument arose when it turned out that Hanks is pro-“carcinogenic” tinsel, pro-putting lights on from the top of the tree to the bottom, and generally pro-“more shiny objects on the tree the better.” While Hanks’s wife, Rita Wilson, is opposed to tinsel, Colbert was with him on the decorations front, until they reached a sticking point that arose when Colbert admitted his love of multi-colored Christmas lights. “Do they flash at least?” asked Hanks, looking shocked and dejected. Colbert responded, “That’s insane! We’re not landing a plane!” It was a full on war on Christmas lights after that. Don’t you hate it when your dads argue at Christmastime? 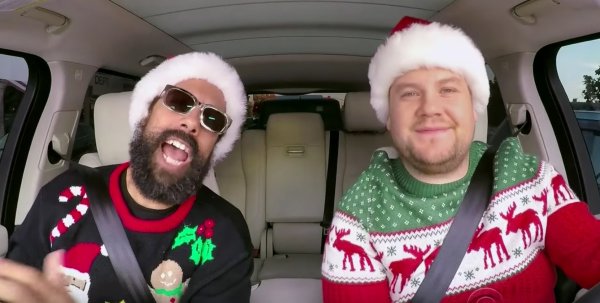 James Corden Got Katy Perry, Miley Cyrus and All the Celebrities for a Roving Christmas Party
Next Up: Editor's Pick