A Baby Born With Her Heart Outside Her Body Is Believed to Be the First in U.K. to Survive

Against all odds, a British baby born with her heart outside her body is alive and recovering from her third surgery.

Vanellope Hope Wilkins, who was delivered three weeks ago in the English city of Leicester, was born with the extremely rare condition ectopia cordis, the BBC reports.

She is believed to be the first baby with the condition in the U.K. to survive, according to staff at the Glenfield Hospital where she is being treated.

Vanellope’s parents, Naomi Findlay, 31, and Dean Wilkins, 43, from Nottingham, told the BBC they were advised to terminate the pregnancy when ultrasounds showed the baby had no breastplate and her heart was outside her chest.

“The chances of survival were next to none — no-one believed she was going to make it except us,” Wilkins said.

Read More: More Babies Are Being Born With Organs Outside Their Body

Vanellope, who is named after a character in Disney’s Wreck-It Ralph, was due on Christmas Eve but was delivered early in order to minimize the risk of an infection or damage to her heart. She was born by Caesarean section on Nov. 22. Within an hour of being born, a team of 50 medical staff performed the first of three surgeries to put her heart back into her body.

“Before she was born things looked very bleak but now they are quite a lot better,” Frances Bu’Lock, a consultant paediatric cardiologist, told the BBC.

Babies born with ectopia cordis have just a 10% chance of survival. In the U.S., in recent years, there have been a few cases where babies have survived following surgery, including Audrina Cardenas who was born in Texas in 2012, and Kieran Veitz who was born in 2015. 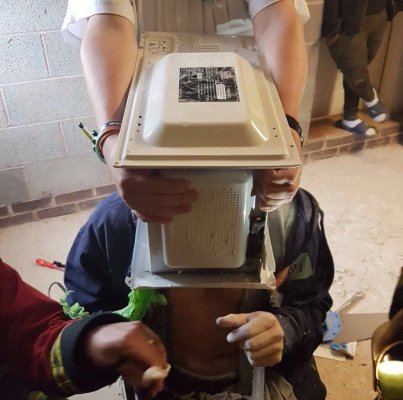 Firefighters 'Seriously Unimpressed' After Spending Hour Freeing Man Who 'Cemented' His Head in Microwave
Next Up: Editor's Pick