Here Are the New TV Shows Premiering in 2018

2017 was a banner year for television. A mutant fought the demon inside him. A detective fought his demon doppelganger. Enslaved women and suburban housewives fought the oppressive forces of the patriarchy. An ice zombie fought and took down a damn dragon. Can the new TV series of 2018 beat all that?

Possibly. Next year, new TV shows will treat audiences to another round of mysteries from Stephen King and Gillian Flynn; spin-offs to popular series like Grey’s Anatomy and black-ish; and investigations into the murders of Gianni Versace, Tupac Shakur and Biggie Smalls.

Meanwhile, the medium is expanding. Riding high off the successes of shows like The Handmaid’s Tale and The Crown, streaming services are pouring money into cinematic level productions. Steven Soderbergh has teamed up with HBO for an interactive viewing experience that takes obsessing over TV mysteries to a whole new level. But don’t worry, upcoming TV series also include familiar police procedurals and superhero sagas.

Here are the new TV shows you should look out for next year.

Yet another Ryan Murphy drama premieres in 2018. But if you’re unenthused by the prospect of another procedural, check out the stacked cast. TV veterans Angela Bassett, Connie Britton and Peter Krause star as the emergency responders — cops, paramedics, firefighters and phone operators — who work to keep people safe.

Zoey Johnson from black-ish is headed off to college. Actor Yara Shahidi is getting her own spin-off in which her character must navigate the complicated modern college campus— from what pronouns her friends prefer to questions about recreational drugs to whether “hooking up” means sex or just kissing.

Lena Waithe made history when she won an Emmy for writing the ground-breaking Thanksgiving episode of Master of None. Now, she’s turning her attention to Chicago with The Chi, her new TV series about a group of south side residents who are linked by a series of coincidences. The show is produced by Common.

This anthology series brings the sci-fi stories of Philip K. Dick (the man behind Blade Runner, Man in the High Castle) to life. Bryan Cranston, Janelle Monáe, Anna Paquin and Steve Buscemi are just some of the many famous faces who show up in these futuristic episodes.

Cress Williams plays Jefferson Pierce, a retired superhero who is pulled back into action as Black Lightning. When he returns to his crime-fighting ways, he finds out that his two daughters may have powers, too.

J.K. Simmons stars in this metaphysical thriller about a lowly bureaucrat who discovers his agency is hiding a doorway to a parallel dimension. When that doorway is opened, he meets his “counterpart,” another version of him that lives on the other side.

A new doctor gets a wake-up call when his senior resident exposes him to the complicated world of medicine: Doctors save lives, but sometimes hospitals also kill patients and cover it up. Matt Czuchry (The Good Wife), Emily VanCamp (Revenge) and Manish Dayal (Agent of S.H.I.E.L.D.) star.

Fans of Sherlock Holmes will gravitate toward TNT’s new series, The Alienist. A newspaper illustrator (Luke Evans), a secretary at police headquarters (Dakota Fanning) and a criminal psychologist, know at the time as an alienist (Daniel Brühl), team up to hunt down a serial killer in 19th century New York City.

Steven Soderbergh (Ocean’s 11, Magic Mike, Logan Lucky) has been dabbling in TV for a few years, with shows like The Knick and The Girlfriend Experience. Now he’s teaming up with HBO on an unconventional “storytelling experience” called Mosiac. The six-episode murder mystery series starring Sharon Stone will premiere in January, but the full experience is available a free app. Users can spend roughly 7.5 hours exploring specific scenes from different characters’ perspectives.

Michael Shannon and Taylor Kitsch star in a six-part miniseries about the deadly 51-day standoff between the FBI and fanatical leader David Koresh’s Branch Davidians in 1993. The writers based the series on two different accounts of the event: A Place Called Waco, written by David Thibodeau, a surviving Branch Davidian, and Stalling for Time: My Life as an FBI Hostage Negotiator, written by FBI agent Gary Noesner.

300 years in the future, the uber-rich can download their consciousness to new bodies, essentially avoiding death. Joel Kinnaman (The Killing, House of Cards) plays a man who wakes up in a new body. But in his case, the change was arranged by a mogul who wants him to figure out who tried to kill him. The series is based on a cyberpunk novel of the same name.

Alec Baldwin will take a break from his Donald Trump impression to join Jeff Daniels, Tahar Rahim and Peter Sarsgaard in Hulu’s buzzy 9/11 drama. The new TV series, adapted from Lawrence Wright’s Pulitzer Prize-winning book, traces the rising threat of al-Qaeda and how a rivalry between the FBI and CIA might have inadvertently set the stage for 9/11 and the Iraq War.

Josh Radnor (How I Met Your Mother) plays a real-life high school drama teacher who transformed his students into Broadway-level stars and galvanized a mining town in low spirits. Sound a little like Friday Night Lights but with musicals? That’s because the producer behind that beloved show teamed up with a Hamilton producer to create Rise. Moana star Auli’i Cravalho, making the leap from animation to live-action television, stars as one of the high schoolers.

Rosanne is getting a modern follow-up at ABC, and fans will be happy to hear that John Goodman’s character Dan is alive and well, despite the fact that he seemingly died of a heart attack in the original series finale.

Gone Girl fans, get excited: Amy Adams is starring in the latest adaptation of a Gillian Flynn novel. The HBO series about a reporter who returns to her hometown to write about a violent murder was created by UnREAL and Buffy the Vampire Slayer vet Marti Noxon and directed by Jean-Marc Vallée, who also helmed last year’s HBO hit Big Little Lies.

Moonlight star Andre Holland and Fargo breakout Melanie Lynskey join Stephen King vet Bill Skarsgard (who terrified as Pennyswise in It). It also promises a creative premise: The anthology series focuses on the town that plays backdrop to so many of King’s mysteries and connects themes and characters from across his overlapping works.

The newest Marvel series is about two teenagers who discover their respective superpowers while embarking on a romantic relationship. Tandy Bowen a.k.a. Dagger can create spears of light, Tyrone Johnson a.k.a. Cloak can engulf others in darkness.

The six-part miniseries based on Neil Gaiman and Terry Pratchett’s satirical book of the same name stars David Tennant and Michael Sheen as a demon and an angel who decide to team up to stop the apocalypse. Oh, and Jon Hamm plays the archangel Gabriel because of course he does.

Heathers (TBA on the Paramount Network)

The 1980s cult classic starring Winona Ryder and Christian Slater as outsiders who take down a nasty clique is getting a modern reboot. Gone are the shoulder pads and teased hair, but classic lines like “f— me gently with a chain saw” remain.

The dark comedy is based on a Norwegian series about two patients in a mental institution. It will reunite Superbad stars Jonah Hill and Emma Stone in the lead roles and will be directed by Cary Fukunaga, who helmed True Detective’s first season.

The novel about the raucous world of New York restaurants by Union Square veteran Stephanie Danler is getting a TV series. Ella Purnell plays a 22-year-old who arrives in the city and lands a waitressing job at an award-winning downtown restaurant. She immediately realizes that back in the kitchen, the waiters, bartenders and chefs are indulging in booze, drugs and plenty of sex in between helpings of expensive canapés.

Tupac Shakur and Biggie Smalls will be resurrected on the small screen this year. Taking a cue from American Crime Story, USA is producing its own true crime scripted drama series. Unsolved will chronicle two real-life police investigations into the murders of rap’s biggest stars.

As Scandal comes to a close, Shonda Rhimes’ Shondaland is launching a Grey’s Anatomy spin-off about Seattle firefighters. Grey’s regular Jason George, who plays Bailey’s husband Ben, will join the series. Grey’s fans will meet the rest firefighter characters first in the flagship series before following their journeys in the new show. 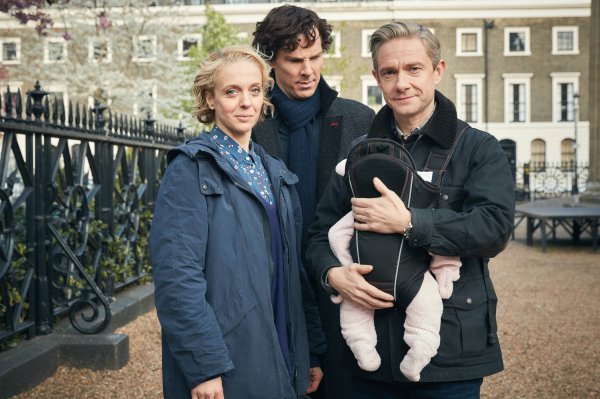 16 of the Best British TV Shows to Binge This Winter
Next Up: Editor's Pick