President Trump Criticized Kirsten Gillibrand. It Ended Up Helping Her

After the New York Democrat became one of a handful of Democratic senators calling on Trump to resign over the allegations, Trump attacked her as a “lightweight” and a “total flunky” for Democratic leader Sen. Chuck Schumer and claimed that she used to “beg” him for campaign contributions.

But Gillibrand shot back, and according to Twitter statistics seems to have gotten the better of the exchange, with three times as many likes and her most retweeted tweet ever.

According to the Center for Responsive Politics, Trump has donated $5,850 to Gillibrand’s campaigns in the past.

The Twitter feud came a day after Gillibrand told CNN’s Christiane Amanpour that she thought Trump should resign, a sentiment that she then shared on Twitter. She joined fellow Democrats New Jersey Sen. Cory Booker and Oregon Sens. Ron Wyden and Jeff Merkley in calling for his resignation, although it was notable that Trump attacked the only woman in the group.

The Trump tweet also led to other Democratic lawmakers taking on the president, with Massachusetts Sen. Elizabeth Warren calling Trump’s remark that Gillibrand “would do anything for” donations “slut-shaming” and Connecticut Sen. Richard Blumenthal calling it a “sexist slur.” 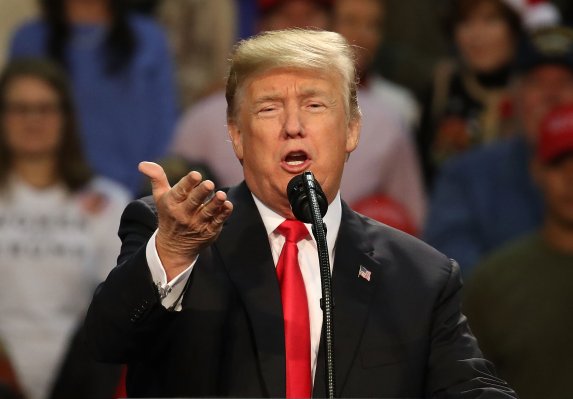 Donald Trump Said He Doesn't Watch Cable News. His Tweets Show He Does
Next Up: Editor's Pick