Although he’s stuck sick in bed in Washington D.C., chef José Andrés is making sure people displaced by wildfires in Southern California are fed.

Andrés, who has already served about 3 million meals in Puerto Rico since Hurricane Maria hit the U.S. island territory in September, felt compelled to act when he saw the wildfires start to spread throughout Southern California last week.

“When I saw what happened, it was the same feeling as Puerto Rico, like, ‘Oh my God,'” Andrés tells TIME. “We need to start now.”

Andrés activated his nonprofit World Central Kitchen, which has joined forces with fellow nonprofit L.A. Kitchen to serve hundreds of meals each day throughout the region, feeding first responders and people in shelters who have been affected by the fires.

As of Monday, firefighters were battling a blaze as it went through Carpinteria, Montecito, and parts of Santa Barbara County along the seaside. Wildfires ravaged other portions of Southern California last week near the Los Angeles area, forcing thousands of people to evacuate and destroying hundreds of homes and buildings.

Andrés has documented his group’s effort in California on Twitter, through photos of volunteers handing out sandwiches, chili, salads and bread, among other foods.

As of Saturday, World Central Kitchen and L.A. Kitchen had reached downtown Ventura, where Andrés welcomed firefighters to eat.

Volunteers in the form of local chefs have poured in to help, Andrés says. He said he put out a call to help on Dec. 7, prompting well-known chefs like Hugh Acheson and Tom Colicchio to get to work. 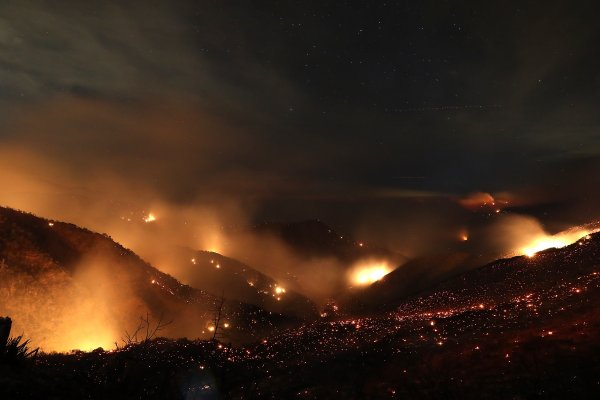 Woman Fleeing in Car Is 1st Death Linked to California Fires
Next Up: Editor's Pick